Mark Sutherland is a friend and colleague at work, who’s been known to wear kilts (but only on special occasions). A native of Scotland, Mark has lived in the U.S. since the 1980s. He recently wrote a children’s story, Why Do We Celebrate Easter, that I reviewed here back in February. Someone dropped the link to the review in Stumble Upon, and page views took off (more than 500 at last count).

Mark mentioned that he had just finished reading Bonhoeffer: Pastor, Martyr, Prophet, Spy by Eric Metaxas, and sent me what is not so much a review but more of a meditation on how moved he was by the book. Mark said it was OK to share it, and here it is. 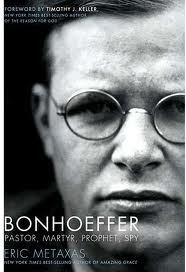 On a rare occasion I get so involved in a book that it becomes real to me. The characters come to life. The story envelops me with its mental imagery and emotion. And when you finish, it’s like emerging from another world that existed for only a short while.
And on an even rarer occasion, a book about real people does the same.

Yesterday, I finished reading Bonhoeffer: Pastor, Martyr, Prophet, Spy by Eric Metaxas. Yesterday, I lost a friend who I won’t meet until eternity.

And you can’t help but ask yourself the question about what would you do.
Are you passionate about God’s Church, to the point of standing against a tyrannical church-state partnership that wishes to redefine what you believe?

Are you so in love with the Word of God that you will stand against the popular, acceptable claims as to what it means, or are you willing to speak against those who twist God’s Word to fulfill their own desires and plans?

And are you so secure in your stand before God, that is based upon faith alone in sovereign plan of God that existed before time began that you would calmly face your execution in a way that impacted those who witnessed it for decades to come?

While you may not agree with everything Bonhoeffer stood for, his life is an example to us all. And his life, and death, should force us to go to Scripture to answer these questions and more.

I look forward to meeting Pastor Bonhoeffer when God calls me home. In the meantime, we have to be satisfied with an incredible biography that grips you like a novel and won’t let you go until you say goodbye to your new friend.

Thank you, Eric Metaxas, for writing this book. And thank you, Dietrich Bonhoeffer, for living it.
Posted by Glynn at 5:00 AM

Those are great questions.

I hope I would stand like Bonhoeffer. I also hope not to have to make such a hard decision. But, I know I can't live without the Lord.

I was recently given this book and now I look forward to reading it more than ever.

I'm glad to know about this one. I read Metaxas's book on Wilberforce a few years ago, and it was very well done.

funny how words do roam.