My Mom and Me: The Early Years 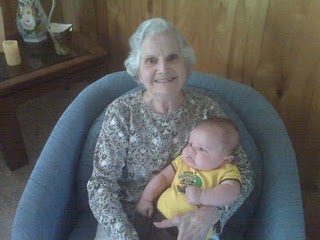 My mother was born in 1923, and born at home on Dauphine Street in New Orleans. She was the fourth of six children, five girls and one boy. The house was located in the Ninth Ward of the city, an area of numerous vegetable gardens for the markets at the back of the French Quarter.

She was a beautiful child, and strongly favored by her father, who’d take her visiting to friends and to his various local haunts. The family had been fairly well off – her two oldest sisters had memories of wearing silk dresses – but then hit hard times. My mother did not know silk dresses. But she loved her family and had a special bond with both of her parents.

Her father died when she was 12. The Great Depression was still going strong, and her mother went to work as a cleaning lady in movie theaters. My mother can remember times when there was nothing in the house to eat, and what it meant to go to bed hungry.

She attended John McDonough High School, then an all-girls public school. And she did well, and loved Spanish (she was president of the Spanish Club) so much that she had her heart set on becoming a Spanish teacher. But life intervened. First came a romance with a football player for Holy Cross High School; the area where my mother grew up is still known today as the “Holy Cross District.” Then came World War II, and a quick wartime marriage that produced one son but didn’t survive the war.

She had worked through the war at the Port of Embarkation in New Orleans, which helped process military recruits for sending overseas. After the war, she continued to work, mostly as a secretary. She eventually landed as a secretary of a trade publisher for the shipping industry, where she worked for – my father. They were married in 1950.

My earliest memories of her date from about 1953 or 1954. And they’re associated with living in a duplex in suburban Jefferson Parish. I wasn’t exactly Dennis the Menace, but I was active and creative.

I thought the new sofa needed some color, so I added black shoe polish, a kind of early performance art.

I snuck the dog in the house, which was strictly verboten, and then had to hide him when I heard my mother come in. I was in the kitchen, so I found the most accessible place to hide him. The oven. (No, it wasn’t on.)

She wouldn’t let me play with her pots, so when she went to check on the clothes in the washing machine in the garage, I locked the screen door and proceeded to play with the pots. She had to get the neighbor next door to take the door off the hinges to get inside.

When she needed a break from her child, she’d vacuum. All it took was the first sound of the vacuum cleaner being turned on and I was on the sofa (the one with the shoe polish stains). She likes to vacuum to this day.

We moved to a new neighborhood when I was 4, and I vividly remember moving day, with my mother stationed in the new house while I rode with my father back to the old house to finish cleaning out the kitchen. I was worried, because our new house was next to woods. I remember asking my father if my mother would be okay with the bears.

Shortly after we moved in, she took driving lessons, so she could drive me to kindergarten at Mount Olive Lutheran School. She hated to drive, but the idea of all the bus transfer that she would have to make – and four times a day if she wanted to go back home – was too much. So she learned to drive, and sat in the driver’s seat exactly the same way for the next 45 years – upright posture, very proper, very serious and very attentive. But even after she learned to drive, she always preferred the bus or the “streetcar” – the New Olreans version of a trolley. Many times I remember riding with her on the bus into the city to see a movie at one of the four big downtown theaters – the Saenger, the Lowe’s State, the Joy and the RKO Orpheum. (The buildings are all still there but only the Saenger remains as a theater.)

My mother loved movies. She saw Gone with the Wind and the Wizard of Oz when they were first released. She loved all of the movies, but especially the epics and the romances. One day, she took me with her to see a movie called The Last Voyage with Robert Stack and Dorothy Malone, which was so full of tension that I cried through most of it. It was not a suitable movie for an 8-year-old.

Some mothers might have taken their distraught child to get ice cream cone or (in New Orleans) french doughnuts (beignets) at Café du Monde. Not my mother. She took her distraught child right across the street to the Joy Theater to see Some Like it Hot with Jack Lemmon, Tony Curtis and Marilyn Monroe.

Of course, she got to see another movie on the same day. She would consider that a good day.

Bottom illustration: Canal Street, New Orleans, about 1930. Except for the cars, it looked much the same when my mother took me to the movies. The Saenger Theater is on the left and the Loew's State theater is on the right.
Posted by Glynn at 5:00 AM

Nice tribute to Mom, Glynn! It makes me want to go down the same memory path with my own mom. Blessings to you both.

Great memories, Glynn. I love the oven and movie stories; they make me wonder what Cameron might have in store.

I love this. Thanks for sharing it. You rascal! I had a bad movie experience too as a child. Poor Moms.

What fun you and your little grandson have in store.

i think
that you
are a lot like your mom.

What a lovely tribute! Your Mom sounds like a wonderful lady.

I need to go hug my boys... They're just being creative and active. ;)

Your story of your mother was captivating, spanning so much history, interspersed with your personal memories. I felt it read like a script to a documentary -- one of my favorite entertainment genre. I was imagining a southern gentleman's voice...

I LOVE Some Like It Hot! the maraca scene! :)