Davis Phinney's "The Happiness of Pursuit" 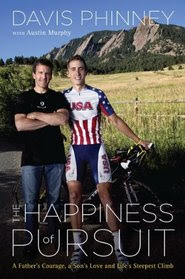 Since I started cycling seven years ago, I’ve read a lot of cycling books – about the Tour de France, Lance Armstrong, memoirs of famous cyclists and histories of the sport. After a while, I began to know how some of these books, especially the memoirs, began to sound alike, following a familiar formula of biography/great races I have known/cycling as a metaphor for life.

Phinney is one of the great cyclists. He was part of the 7-11 team that cracked the Tour de France open for American-based squads. He won stages in the Tour de France. He biked the infamous Passo Gavia stage in the 1988 Giro d’Italia – the one that included a snowstorm and cyclists getting frostbite and has passed into cycling legend.

In 2000, retired from professional cycling but with a burgeoning television commentator career, Phinney was diagnosed with Parkinson’s disease.

In The Happiness of Pursuit, written with Sports Illustrated senior writer Austin Murphy, Phinney weaves four connected stories into the story of a life – his professional cycling career, his relationship with his father, his battle with Parkinson’s, and the cycling career of his son Taylor, who’s become an accomplished cyclist and biking champion at an incredibly young age.

He tells his story with candor and insight, two qualities often lacking in other cycling memoirs. His struggles with his disease, how a distant-at-best relationship with his father grew into something important and meaningful after his father was diagnosed with metastatic prostate cancer, Phinney’s less-than-endearing personality in his early racing years – all are treated openly and honestly. He worries less about other cyclists’ shortcomings and failures and more about his own, and gradually the reader comes to see that this is a man who’s come to terms with himself, his life and with a crippling disease.

What also shines through is his love for his family. His wife, Connie Carpenter, won Olympic gold for cycling in 1984 and was a champion in her own right. And she is depicted here as one strong woman, who carries her family as her father-in-law and her husband both struggle with disease. Phinney also tells the story of Taylor, who starts his cycling career at 15 and starts it with fireworks (and the fireworks show is still going on).

The Happiness of Pursuit also differs from other memoirs in this important fact of Phinney’s life: the cycling career is put into its proper perspective. It’s important, yes, but Phinney comes to understand it for what it is – a career, and a successful one, but not the most important thing about his life.

The Happiness of Pursuit by Davis Phinney with Austin Murphy will be published June 1.
Posted by Glynn at 5:00 AM

This definitely sounds like a book I will enjoy reading! Thanks Glynn

Gonna have to get my hands on this book for sure. I smell an Amazon purchase. Thanks for the great review Glynn.

*Are you still taking names for those contributing to the The High Calling matching donor drive? If so, you may add my name to your poetic list. ;-)

The book title I forgot up there is "The Grace to Race."