C.S. Lakin's "The Land of Darkness" 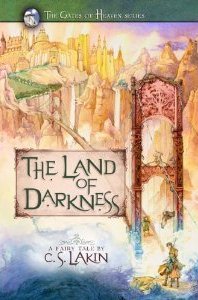 C. S. Lakin has now published The Land of Darkness, her third novel in the “Gates of Heaven” series. The three stories stand as independent novels, linked by the world and geography Lakin has created and a fshared characters.

Somehow, the stories are getting better. And I really enjoyed the first two novels, The Wolf of Tebron and The Map Across Time.

Each of the novels are subtitled “fairy tales,” and this description becomes especially pointed in The Land of Darkness. The story has everything a (grown-up) kid could want – mysterious creatures, a quest, a story that never falters and even a wicked stepmother and two ugly stepsisters (yes, I know that’s politically incorrect, but that’s the story). And it’s all wonderful.

Jadiel, a 12-year-old girl, lives with her wealthy father and stepmother on a spacious farm. The stepmother is not what she seems, and finds way to bewitch the father while she steps up her mistreatment of and cruelty to Jadiel. After several unsuccessful attempts to kill the girl, the stepmother sends her off to find the leaves of the terebinth tree, which no one seems to have heard of. If Jadiel fails in her quest, the stepmother will kill her father.

Callen, a young man not much older than Jadiel, works for the girl’s aunt and uncle. He becomes interested in old parchment drawings of a bridge, with words inscribed in an unknown language and the drawing of a giant tree. He leaves for the capital city of Sherbourne (which was the major setting of The Map Across Time) – and finds himself rescuing Jadiel from kidnappers.

Together, Callen and Jadiel embark upon a quest, she to save her father and he to find the bridge. Eventually they are joined by an old, scarred guide named Ebed, who directs them forward both geographically and spiritually.

The reader comes to understand that whatever else The Land of Darkness is, it is the story of a spiritual quest, one that transcends the fantasy it’s set within to become something very recognizable – the meaning of faith.

It’s a delightful, enchanting story. Even with the wicked stepmother.

My review of The Wolf of Tebron.

My review of The Map Across Time.
Posted by Glynn at 5:00 AM

Email ThisBlogThis!Share to TwitterShare to FacebookShare to Pinterest
Labels: C.S. Lakin, fantasy, fiction, Gates of Heaven, The Land of Darkness

Your reviews always make me want to rush out and buy the book.

and the virtual bookshelf on my Ibooks is getting too heavy to carry!

fourth time trying: I read the other two at your suggestion. Reckon i will read this one also.