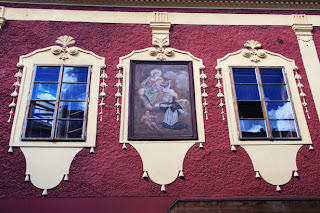 Your child is born with cerebral palsy, and you’re told he will never walk. If you’re Jorge Cardile in Argentina, you decide that you will not accept that diagnosis. Greg Sullivan at Sippican Cottage found an amazing video – it’s in Spanish, with a link to the story translated into English, but you can see that what happens goes beyond the need for language.

Charity Singleton has a deep take on the word “litany;” Louise Gallagher salutes her father for Veteran’s Day; Jim Schmotzer turns outrage over the Penn State scandal into a poem (I haven’t begun to consider how to explain my own reaction), while Steven Marty Grant channels Raymond Chandler into a poem. All this and so much more.

“The Face of a Movement” by Fatha Frank at Public Christianity.

“Super Helpful American God” by Matt Appling at The Church of No People.

“You know a long sermon is coming when…” by Jay Cookingham at Soulfari.

“Isolation befriended me” by Michael Perkins at The Handwritten.

“Be Still and Know” by Jason Vana.

“Build” by Jake Lee at Very Much Later.

“Five Tips for Dealing with Conflict at Work” by Bradley Moore at Shrinking the Camel.

“Changing the world” by Billy Coffey at What I Learned Today.

“The reluctant optimist” by David Rupert at Red-Letter Believers.

“Off Road” by Doug Spurling at Spurling Silver.

“When it hurts too much to sing” by Jennifer Dukes-Lee at Getting Down with Jesus.

“There and Back Again: Litany” by Charity Singleton at Wide Open Spaces.

“In Their Sacrifice I Am Free” by Louise Gallagher at Recover Your Joy.

“Scarlet’s a Bushwacker” and “Birder’s Tales” by Maureen Doallas at Writing Without Paper.

“Fragments of the Broken People” and “Dream Home” by Lorenzo at Crowned with Laurels.

“Flight EZS8430 to London” by Claudia Schoenfeld at Jaywalking the Moon.

“Sunrise over Mijas” by M.J. Duggan.

“I was thinking” and “Another cover-up, (alleged) cover-up” by Jim Schmotzer at Faithful Skeptic.

“At the Edge of the field,” oil on prepared paper, and “Down into the water,” oil on canvas, by Randall David Tipton at Painter’s Process.

“An Ordinary Life” and “Once Upon a Time” by Susan Etole at Just…A Moment.

“Late 60s yin and yang” and “I am Not a Good Father. This is a good father” by Greg Sullivan at Sippican Cottage.

Photograph: Old Decorated Windows in CeskyKrumlov (Czech Republic) by Petr Ktraotchvil via Public Domain Pictures. Used with permission.
Posted by Glynn at 5:00 AM

Glynn, a client at the shelter where I work sent me an email which included a piece of music he'd written.

"Without you," he wrote, "this music would never have been heard." And he finished with, "At the end of the day, we can only ask ourselves: Did I make a difference? Yes, you did."

At the beginning of this day Glynn, you have made a difference -- a great way to start the day and to end it.

Without you, without the encouragement you constantly give, writers might lose momentum, ideas never be born, words never be written.

You make a difference Glynn and I thank you.

So nice to see Jim's poem (on such a tough subject!) and Pete's highlighted. Greg Sullivan's piece is also a very good read. Well, everything here is!

Thank you for including my poems.

nice surprise to see my london flight included in your saturday goodreads...still smelling the cardamom of the indian mama...smiles
happy saturday glynn!!

i agree with the others. you really serve the writing (& reading) community well.

thank you for this sharing.
talk about colourful...
:-)

The variety and encouragement you offer is greatly appreciated.

Prayers for restoration for your back.

hi glynn...having not written for a while and then suddenly bang..its great to see you pick my poem to share among other greats..thanks and keep doing what you do...all the best Pete

Hi Glynn, thank you, seriously. I just finished reading a critique and was thinking I should turn my writing pen into a fishing lure for all the good it was doing me. And then you showed up and made a difference. Thanks my friend I appreciate you.