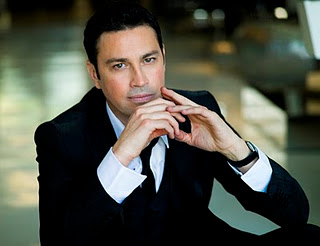 The idea for my soon-to-be published novel Dancing Priest came from a song I heard on an airplane.

In October 2002, I was flying from St. Louis to San Francisco to attend the annual meeting of the Public Relations Society of America (PRSA). I was more than an attendee; I was also an official delegate to the PRSA Assembly, which met the day before the annual meeting began. So I would have been flying on a Friday; the assembly met on Saturday.

I don’t recall what the in-flight movie was, but whatever it was, I didn’t watch it. Instead, I flipped through the various music channels, until I happened upon this incredible tenor voice singing.

The voice belonged to the Greek singer Mario Frangoulis. I hadn’t heard of him before but I listened as the host of the program interviewed him in between songs. He sang in multiple languages – Greek, Italian, English, French and Spanish (he’s also fluent in all five languages). I was amazed at the quality of his voice and his multilingual singing ability. The program was a promotion of his recently released album “Sometimes I Dream.”

At some point in the musical program, Frangoulis sang “Luna Rossa,” or “Red Moon.” Here is the song as he sang it at a concert in Thessalonika in Greece, which I am fairly certain is the version I heard on the airplane:

The song evoked an image in my mind: a priest dancing on a beach. And it wasn’t a Catholic priest, but an Episcopal or Anglican priest. He wasn't dancing by himself but with others, possibly part of a tour group.

The in-flight program ended, but the music kept playing through my head. The album included several other songs that would later become important. It also had “Buongiorno Principessa” from the movie Life is Beautiful and “Nights in White Satin” sung with Justin Hayward of the Moody Blues (a stunning version of the song). 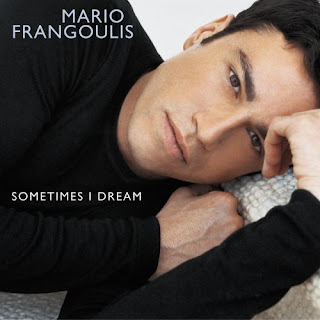 When we landed in San Francisco, I made my way to my downtown hotel and then went looking for a music store. I found a Border’s Bookstore nearby and rode the escalator to the music department on the fourth floor. Just as escalator arrived on the floor, straight ahead of me I saw a large display for the Frangoulis CD. I bought the CD.

I have likely listened to the CD no fewer than 250 times. Every time I heard “Luna Rossa,” the image of the priest dancing on the beach came back. I couldn’t shake the image. And then one day, the image “progressed,” as it were. The priest and the people he was traveling with, including a young American woman, walked from the beach into a restaurant for dinner. At that moment, the idea of a novel was born.


Several songs on the CD helped to frame the novel. The title song, “Sometimes I Dream,” is the song I had in my mind as the music for a very early scene I still refer to as “The Last Tango in Edinburgh.”

But while the idea of the novel was born and began to take shape, I would not put pen to paper (or words to computer screen, to be more exact) for three more years.
Posted by Glynn at 5:00 AM

Glynn - thank you for sharing the magical birth of your novel. I am so excited to read it soon!!!

LOL -- YOU are on my Christmas List of good reads to treasure! How exciting.

Ha! I was right! You are writing fiction! Details, please, details.

hmmm...I smell popcorn & a movie with this

Life IS beautiful. It is fun to be introduced to new music, especially music that compels one to tell a story.

Fun to read about the inspiration for your novel.

I wonder, sometimes, what inspires a good story. Thanks for telling the story of your story here. Looking forward to it!

That song has been around the block. Like a lot of great songs it came from southern Italy, probably Naples. Frank Sinatra used to sing it.
And Sergio Franchi, Mario Lanza, Giuseppe di Stefano. The lyrics are translated here: http://www.lyricsfreak.com/f/frank+sinatra/luna+rossa+blushing+moon_20241972.html I had not even heard of Mario Frangoulis, but he's a find, no doubt about it.
My wife and I are both singers, and we know so many gifted and dedicated musicians who are living in penury while psycho pop artists get rich. It's always refreshing to hear somebody making it who can actually sing.
I'm looking forward to reading your story inspired by this music!

I'm looking forward to the book too! It'll be great.

The mind, which imagines stories and inspires us to write, is a gift from God, isn't it?

ok,ok. I promise to buy and read the book,and then tell 1,000 of my closest personal friends to buy it... if YOU promise to mention me as a backup singer for Mario when you and your wife go touring with this man. (ahem) =)

Isn't it amazing how the Lord will drop little bits into our hearts and minds and then explode and expand them to bless us and others. I love it!

I look forward to reading it.