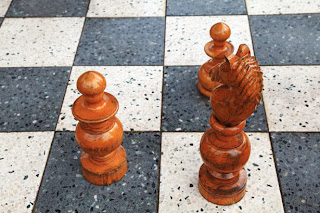 Many years ago, I was part of a team of people who worked very closely on a series of projects, mostly of the “crisis” kind. The team leader was generally well liked, and prided himself on having a strategy for every project and every crisis.

As can happen with a team like this, we tended to lurch from crisis to crisis, and we often seemed to be doing ongoing crisis management. This kind of work is hard, harder than most. You’re usually dealing with negative news. The news is always highly visible inside and outside the organization. And your personal “exposure” can often be high, especially if what you say is likely to be repeated in places like newspapers, TV reports and blog posts.

One day, after yet another meeting on yet another crisis, a team member and I were walking back to our offices when, almost out of the blue, he offered this characterization of our team leader: “He has a strategy for everything and a vision for nothing. And it’s killing us.”

It was one of those startling moments, when something is said and you immediately grasp the truth of it. In this case, my co-worker had nailed it.

Unless a vision comes first, strategy will become generally useless – and counterproductive.

The fact is, vision has to come first. Then strategy. Then tactics.

Take, for example, the Great Commission in Matthew 28. Jesus tells the disciples “to make disciples of all nations, baptizing them in the name of the Father and of the son and of the Holy Spirit, and teaching to obey everything I have commanded you.” There it is – the vision. Christianity was for all nations, and the disciples would be the ones to make that happen.

But the vision was long term, and that’s what the disciples grasped. No matter what happened in the short term – persecution, stoning, imprisonment, harassment, even death – the vision of Jesus in Matthew 28 was eternal. Jesus even implied that in the Great Commission: “And surely I am with you always, to the very end of the age.”

Strategies and tactics can change. Visions tend to be for the long haul.

This post is submitted to the One Word Blog Carnival hosted by Peter Pollock. The one word prompt is “strategy.” To see more posts, please Peter’s site.

Photograph: Street Chess by Petr Kratochvil via Public Domain Pictures. Used with permission.
Posted by Glynn at 5:00 AM

A wonderfully apt posting for All Saints Day, Glynn.

I like the progression here, and the observation that the disciples' strategy might have seemed rather lame. And talking about 'grasping' the vision makes me wonder about how much effort we give to generating vision, and when it's good to notice what's been supplied.

I lvoe the way you worked successful management techniques into the great commission. Obviously, it's working.

I kind of laugh at these great visions at work with no execution. Or very complicated plans that don't have any foresight.

Thanks for this Glynn. I was just reflecting on the disciples and the early Church yesterday. You are right, the strategy worked : ) And is still working today. I wonder if we spend too much time fighting fires and forgetting the Great Commission.

In offices- it seems there's no vision at times. If there is it's a catchy phrase that no one really understands : )

Vision first, strategy second, tactics third. This is the time of year I start planning my spiritual resolutions for the next year, so I love this reminder today to keep things in the proper order. Thanks, Glynn.

Glynn, you nailed it! I've worked in a similar environment, and I totally identified with the scenario you described. We used to work day to day, handling each crisis and waiting for the next one. But no plans for the long run.
And I loved it how you used that and took it to the spiritual life.
Excellent post!

I so appreciate reading this today as I am preparing to face the lion head on.

The problem is tactics are so much easier to have, especially without all those pesky "visions". Like chess; can I envision the end-game? *bahahahahaha* Ahem. What I meant by that outburst, is "a couple moves ahead" is enough, right? Just because I only win with a few pieces left on the board (could these be likened to friends or co-workers?) I still win, right?

this post makes me think that getting to know each person on a team personally and being aware of their gifts and personalities is a good starting point...

Jesus knew his disciples and spent a lot of time with them.

Excellent! Somehow very timely for the All Saints' Day, too. All is well if our vision of heaven is vivid. Thank you, Glynn! May God continue to bless you richly!

So MUCH good stuff here, in the post and in the comments.

But the vision was long term ... Visions tend to be for the long haul.

Louise, I prayed for you that the Lord would give you needed vision and grace, for His glory.

Nance, you think with the heart of a leader. Put me on your team? :D

Without a vision the people perish. Vision first and keep your eyes on the goal that has been revealed. Great Post and your co-worker had insite beyond his years.

… and a vision for nothing.

This was a wonderfully told story, Glynn.

Very interesting discussion here, Glynn, about the relationship between vision and strategy. I don't know if I've ever thought about that, and will be mulling this over for a bit. Thanks for a great post!

He couldn't see the forest for the trees? A heard a mountain man told the secret to stay the course and not get lost in the trees is to look where you want to go when you're on top of the mountain peak and then never change course in the valley.

And then there are those of us who have no strategy...