He watched her. He couldn’t help but watch her. 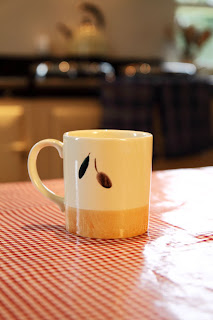 He was dawdling over his coffee and newspaper, killing time before going back to sit by Karen’s bed. The days were growing shorter; winter was coming.

Bored with reading the newspaper a second time, he saw her as she entered the cafeteria. She walked to the coffee bar and selected dark roast, the one on the far left. He knew because he had chosen the same one.

He felt vaguely guilty as he watched her. Karen slept almost constantly now, heavily medicated to counter the pain. The cancer, which started so innocently as a backache, was consuming her.

The woman sat two tables away. She placed her purse on the floor at her feet and a book on the table.

When he looked up from his newspaper again, he could see the woman was absorbed in her book. Her hair was dark, framing her oval face and dark eyes. She was well-dressed, but then she would be; the hospital was private and expensive. He wondered who she was here for, a parent or sibling, perhaps her husband.

A server walked up to her table, asking if she’d like more coffee before the breakfast bar closed. She shook her head and said “No thank you,” loud enough for him to hear the Italian accent.

He guessed her age on the younger side of 40. Everything about her was striking, including the white gloves she had removed before she stirred her coffee. No one wore gloves any more, yet they were perfect on her.

He thought of Karen and her ravaged body, her spirit buried under a mountain of medication. Karen had been a beauty, too, until the cancer.

They had had a good marriage, mostly. He knew about the affair with his brother. Karen had thought she had hidden it but he had known almost from the beginning. He had spoken to his brother, not in anger or a rage but in the way appropriate for their class. They were civilized. His brother had broken it off without telling Karen why, devastating her. He hadn’t talk to his brother in years.

He watched this young Italian woman, who was at least 15 years younger than he was, and, oddly, he felt gratitude. He loved Karen, even though he knew she loved his brother more. He had loved his time with her, to hear her laugh, to see a certain turn of her head, to hear her tell a joke as only she could tell it, to see how much she loved their son. She had been his wife for what seemed too short a time, and now she was slipping away. He was entering a fog and didn’t know any way out.

The woman was suddenly standing in front of him.

“I think you need this,” she said, handing him a handkerchief.

It was then that he noticed the tears on his cheeks.

Over at Faith Barista, Bonnie Gray is hosting a blog carnival on faith, and the prompt for this week is “gratitude.” I stretched it a bit, and rewrote one scene from a section I had cut a year ago from my novel Dancing Priest, to be published in ebook form in December and paperback in January by Dunrobin Publishing.

Photograph: Single Cup by Petr Kratochvil via Public Domain Pictures. Used with permission.
Posted by Glynn at 5:00 AM

What a great teaser for your book; it makes me want to read it!

So good. I wanted to read more. Wow.

THanks for the excerpt. Nice to see the fictional side of you!

Well, if this is the part you cut, I'm really looking forward to reading what you chose to keep!

Wow! I love this! I'm also writing a series of stories, mostly truth with a dash of fiction, would love to have you stop by some time! (I usually post on Fridays)

oh, how I love anticipation! Thanks for a peek. =)

Wow - you're good at this story telling, writing stuff - It was if I was watching a movie. I want to see the rest of it...now. I'll make the popcorn you bring it over.

Interestingly, this can stand on its own as a piece of short fiction. It works as well as it does because the details are so recognizable. Nice write!

Glynn, are you writing fiction yet? You should be.

I'm ready to read the rest of the story!

Aww... this is very touching, and now you have my curiosity up.

Very nice! I was captivated. Poor Karen though and such a beautiful name : ) You are good at fiction story telling Glynn, very good.

Oh my. So much there in those characters. I agree with other comments... this is a good teaser for your book!

I'm eagerly anticipating the day your book is for sale!

Seriously considering a kindle for Christmas. If I get it, yours will be one of the first books I get. Loved this piece!

that was a good little appetizer.

Very, very nice Glynn. So looking forward to this book of yours.

Have been away for a few days and am only now catching up with my regular bloggers..

Well, young man, you've just ensured a pre-publication purchase - one of many, I suspect!