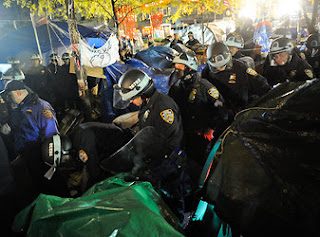 Shortly after midnight Tuesday, New York City police moved in to clear Zuccotti Park of the Occupy Wall Street protestors. Some 142 people were arrested inside the park and another 50 outside. At this moment, the park is surrounded by barricades to keep people out while legal wrangling goes on.

If you’ve followed the stories, the Occupy protests were either (a) people rebelling against the people who run things, ostensibly for their own benefit, or (b) a hotbed of labor union activism complete with rape, sexual assaults, tuberculosis and shootings. In this case, the truth doesn’t lie somewhere in the middle; instead, it lies all over the place, including at the extremes.

A few commentators early on tried to compare the two movements as comparable, but it was soon clear that wasn’t the case at all. While they are both protest movements, they have different means, goals and objectives.

President Obama came out fairly early and appeared to endorse the protests, and then he disappeared. No one is quite sure why he did that.

I mentioned in an earlier post that I was fully prepared to be on the critical side of the Occupy protests, until I read what two young Christians had to say about it. Their writings gave me pause, and I stepped back and took a harder look, at both the protests and my own reactions. Good thing, too, because I was going to do my usual conservative knee-jerk response. What I learned told me more about myself than it did about the protests.

Movements often get co-opted, and Occupy is no exception. The unions, or some of them, moved in with resources. Anarchists showed up, although an organization of anarchists should be a contradiction in terms. Everyone with a cause showed up – animal rights, stop the war, organic food, you name it. It became confusing to understand what this was all about except perhaps one big protest party.

But early on, there were things said that have since been lost, and probably shouldn’t have been. Interestingly enough, the things were similar to what some of the Tea Party people have been saying. It was – is – the original sense of both protest movements.

And it is the idea or perception, rightly wrongly, that the elites in the United States are doing two things – one bad thing and one venial thing. The bad thing is that our elites – political, economic, cultural and academic – are making a general botch of things. They not doing their jobs, and/or they’re doing them badly. The venial thing is that they doing a bad job and taking care of themselves in the process, making sure there’s enough room in lifeboats for themselves and good luck to the rest of us.

The Tea Party said the same things, but in different ways. Tea Party supporters tended to aim at Democrats (don’t forget the “Louisiana Purchase” and the “Cornhusker Kickback” whose votes for the health care proposal essentially were bought). Occupy supporters have tended more to aim at bankers, big business and other “big” institutions, with a lot of ire saved for the recipients of the “big” bailouts, engineered by Republicans and Democrats alike.

But they’re saying many of the same things. And once you cut away the political rants and posturing of both left and right, not to mention reelection politics, you see the message boiled down to what it is.

It’s about trust. There isn’t any left.

I don’t have good feelings about where this might lead. And so I do the only thing I know to do, the thing I should have been doing all along.

Oh yeah. Pray. I keep forgetting that one.

I pray for the US- I should pray for Europe as well. I may be wrong, but I believe the original purpose was to protest our government's bail outs, while our citizens can't find work. It's all muddy now. I'm surprised they were allowed to stay in the park as long as they could. NYC has several loitering laws.

News today is an oxymoron, now it's sensationalism and getting the most viewers at any cost. Trust is dieing. You are right.

My understanding is that there is a restraining order against the City (the case is scheduled for a Tuesday hearing), which means it cannot keep people out of Zuccotti Park; indeed, some people have gone back into the park, though they must pass through barriers, put up to ensure tents and tarps are not brought back in. (The Supreme Court has upheld rules about city parks, so the no tents/tarps reg can be enforced.) No one can sleep there either, although they are not prevented from sitting up all night on a bench or table (see the NYT City Room photo of this).

Still, although the park is now largely empty, I'm not ready to dismiss the protest there or in the other cities as just lots of hot air. Wrongs - and the inequities highlighted by #OWS, even if not so expertly focused on the institutions responsible, are to be deplored - are never corrected by staying quiet. This country's history has shown the truth of that over and over. Peaceful protests can bring change. Billy-clubbing protesters and dumping 5,000 books in the trash will not.

I often think both conservatives and liberals are right about the vices of their opponents. There are elites on both the left and the right, many of them making careers of controversy. They are both very corruptable, if not already corrupt. That isn't only cynicism; it's another version of the familiar quote by Lord Acton: "Power tends to corrupt; absolute power corrupts absolutely". Yes, pray, deliver us from evil, in our opponents and in ourselves.

Powerful -- both your piece and the comments.

As Susan said -- Thank you Glynn

Glynn, thank you. You gave me pause to think and pray.

My opinion as a non-young person: We live in tough times. Maybe not tougher than when the battles were taking place when the Unions began all those decades ago and company owners stepped out to kill workers, etc. Don't know if this is worse, BUT with the media laying things in the face so easily and so often, it's hard to see the reality. I wouldn't want to be there, necessarily, but if that was the only way to get an overview, it might need to happen... someday.

One aspect that has made MANY Nebraskans just want to cringe is the "Cornhusker Kickback"... believe me, that was not the norm for us. And our politician has been losing ground ever since.

Good summary of this serious situation.