C.S. Lakin's "Someone to Blame" 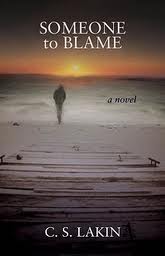 Matt and Irene Moore and their daughter Casey move to Breakers, a small summer-tourist kind of town in northern California. A family whose faith has been almost wrecked, they are trying to leave behind them a family tragedy – the accidental death of their youngest son, and the suicide of their oldest son. Their new town is not an escape; instead, it will be where all three of the Moores have to come to grips with what happened and what lies ahead. And the catalyst will be Billy Thurber, a drifter-type who always seems to be up to no good.
Then thefts, fires, break-ins and property damage start happening, and the town suspects Billy is the culprit.

Someone to Blame by C.S. Lakin explores a number of themes and ideas: how we attach blame because of our own fears, losses, and tragedies; how we can reach a point where we can rationalize violence; how we form impressions and make judgments of others because of appearance and attitude; and how we feed our own prejudices.

Lakin moves the story through a number of different points-of-view: Irene Moore and her husband Matt; their daughter Casey; Sheriff Huff; Jerry Hubble the embittered, alcoholic owner of a motel; an elderly couple who operate a small hardware shop; the owner of the bait shop; and others. All of them see Billy Thurber through different yet not necessarily conflicting eyes. The one character who doesn’t tell much of the story directly is Billy, and he may well be the most intriguing (and important) character in the novel.

There is some emphasis on the importance of faith but it’s not overpowering. The local pastor plays a relatively minor role, mostly to offer comforting words to Irene, although he’s part of a rather short but tantalizing scene involving candles being lit in the church by person or persons unknown.

Someone to Blame is an ambitious novel, and largely succeeds at what it sets out to do – examine why we are often so desperate to assign blame for failings that are often our own.
Posted by Glynn at 5:00 AM