Thanksgiving: Of Such Is Greatness 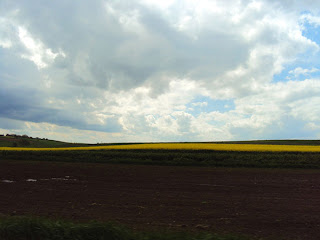 My first thought is of roads.


Quiet roads. Roads busy with traffic only in the spring and fall, when planters and combines and tractors are being moved from shed or barn to field, from farm to neighbor’s farm. At other times, empty roads, a little busier on Sundays when families head to church or on weekdays when the school buses are picking up children, but quiet roads nonetheless.
The roads meander between fields of corn and soybeans, wheat and sorghum, dairy farms and a few orchards here and there. Roads connecting farms and towns, neighbors and friends, work and rest. Pickup trucks carrying seed and supplies travel these roads, as do trucks hauling corn and beans from the harvest.
When we think of what ties countries together, we think of information networks, interstate highways, airline schedules, train tracks. And yet, these roads that have names like “A” and “D” or FM 27 are our geographic arteries and blood vessels. Without them, and the work they support, all the rest wouldn’t matter. Silicon Valley exists because your average farmer In Iowa or Ontario produces enough food each year to feed 150 people. People like me and my family.
This fall, I spent a few days at Laity Lodge in Texas with a group of writers who are part of the staff for The High Calling. One of them lives off one of those roads in Iowa. The other lives off one of those roads in Ontario. They’re both writers, mothers and farm wives. And neither of them would bristle at being called a farm wife because they and their families know exactly what that means.

Jennifer Dukes-Lee and her husband Scott farm in Iowa. Jennifer was the political correspondent for the Des Moines Register before she and Scott moved to his family’s farm to take his dad’s place. I could tell you all kinds of things about the Lee family – I’ve been following Jennifer’s blog for more than year – but you should visit her there first. And you will learn a lot about farming, and family, and values, and faith, and what’s important in this life.

About a year ago, Jennifer was writing with a catch in her throat; I could sense it and feel it with every blog post. It was Scott’s first harvest to manage on his own, and it was one of the most difficult harvests in recent memory. Planting had been late because of wet weather; and harvest was equally late. Scott was often in the fields at midnight and later, and he finished and shut the barn door on his equipment just as the snow started. A lot of farmers weren’t so fortunate, and were harvesting in the snow. But I could read the tension in what Jennifer was writing and see it in the photographs she posted.

Ann Voskamp and her husband David farm in Ontario. At Ann’s blog, you can learn about family, and faith, and tradition, and values, and the beauty of day-to-day living. Both Voskamps come from farming families, and family is an idea that will surface again and again in her writings.

This spring, the time had come for her oldest son to climb up into the cab and learn how to till and plant fields. She captured his nervousness exactly, because it mirrored her own. And one picture told the story: her father-in-law, her son’s grandfather, sitting in the cab with her son, his hand on the young man’s shoulder, her husband holding on to the side as he listened. Teaching, passing on knowledge, the embracing of a tradition.

And all of that greatness comes flowing down those roads, eventually finding its way to each of us.


Photograph: In the Country by Bobby Mikul, via Public Domain Pictures. Used with permission.
Posted by Glynn at 5:00 AM

Please add my thanks to yours ... and Thanksgiving blessings to all.

Thank you bro' for sharing your talent and broship! God Bless you!

This is a beautifully written essay, Glynn. I join you in giving thanks for all those roads, some of which we travel often in Virginia when we visit places like Culpeper and Warrenton and other old towns, and many that pass by and lead to families who make our lives possible.

I also give thanks today for your friendship.

I come from farm stock myself -- thanks to Ann and David.

thanks for the farmers, God. amen.

Thanks to the farmers! Thanks for reminding me that the three bean casserole has origins of family and hard work.

Scott and I appreciate you so much. Truly ...

Yes. [applause] Interconnected and dependent is a gift.
I love the way Ann and Jennifer bring it close and familiar. Lovely tribute and honor. We are wattled together....