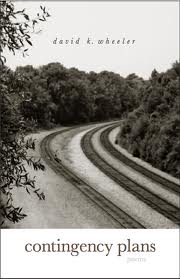 David Wheeler is a poet, essayist and musician in suburban Seattle. He’s written on subject as varied as why he did but doesn’t now run to the loss of a sense of place in the old neighborhood. And he’s written for a number of publications, including Burnside Writers, The High Calling, and The Morning News, and has an essay published in The Pacific Northwest Reader.

And he’s taken what he’s learned and experienced from poetry, essays and articles, music, and life so far, and combined all of this in an extraordinary book of poetry entitled Contingency Plans.

The poems are divided into five sections, each introduced by short essays that read like prose poems. While there is order and structure, there is no single overwhelming theme; instead, there are several themes, themes that reflect life – youth, age, love, growing up, and faith, perhaps faith most of all. These poems are the story of a young man beginning to experience the world as an adult, youth left only recently behind and full maturity yet to come.

Consider these lines from the poem “Take shelter, Take cover:”

Seclusion
is a man refusing to revolve the doorway.
He pushes supermarket grocery carts
and avoids getting involved with anyone.
Loaded with bottled water and resolution,
he resides in the stale firmament
occupied by everyone
he never looked in the eye.
Between aisles of cold metal shelves
he carts just enough to horde
himself, a causation of solitude,
like how ipecac induces vomiting,
with weak corners of his mouth…

The poem goes on, and one could probably write pages about it. What is particularly striking is the use use of the supermarket cart language – few people are more secluded (or anonymous) those those who push supermarket carts. The poem doesn’t tell you if the man belongs to the class of supermarket workers or the class of homeless who push their worldly goods around in a cart. And then you begin to plumb the depth of those lines about residing “in the stale firmament / occupied by everyone / he never looked in the eye…”

The depths of these poems are startling. And I mean “depth” in the sense of layers, meanings and different ideas and concepts that can happen with each reading. From the poem “The Backwoods:”

There the fiddleheads reach
upward. Air ambles
in fog and pollen and
imprints left around
the roots of giant pines.
They call you
back if you’re listening:
moans, grunts, or wails,
like something roams
Between the trees and
leaves tufts of hair for us
to find and follow back,
far into the forest.
The stories go further back.

And then there’s faith, woven into many of these poems about some of the most common or mundane things with a kind of golden or silvered thread, not immediately obvious until you read and reread and ponder, and then it becomes clear. From “Father’s Day:”

…The business trips you took
us on. The short stories said
while waiting at the post office.
How you tried to convince us
that camping was fun; it was

in retrospect. The tree house,
hung from an ageless pine,
provided a new perspective
on everything I saw from ground-
level, our whole backyard.

There were things done – trips – camping – but it was things constructed – the tree house on “an ageless pine” that changed everything.

These are beautiful poems, with subjects ranging from the continental divide to shaving (“Shaving” is one of the finest poems I’ve read, I think).

Contingency Poems is Wheeler’s first published volume of poetry, and it will serve as an unbelievably fine introduction for the ones to come.


(Disclosure for the Federal Trade Commission: I bought this book with my own hard-earned money. No one gave me a copy to review. No one has offered me anything to promote this book. I’m reviewing it because it is an outstanding collection of poems that more people need to know about.)
Posted by Glynn at 5:00 AM

you have no idea how much I appreciate being introduced to different poets. This really helps me out quite a bit.

The real ones dig deep.

He appears to be for real.

Thanks for sharing those lines with us, Glynn.

You beat me to doing a review; my copy came Saturday and I spent the afternoon with it. David's an impressive poet. I think he's also one to watch.

Terrific review. And I agree with Maureen. David is one to watch. I believe that if he keeps writing, we will see him go far. Very far.

BACKWOODS
makes me think of Sasquatch


my verification word this time is
ploote