So I Say Thank You 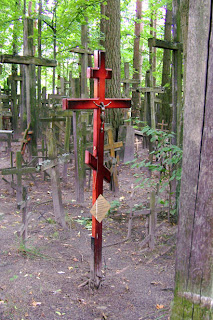 Bridget Chumbley is hosting the One Word Blog Carnival (links go live tonight about 9:30 central time), and the word this time is gratitude, something you can never express too much.

I’ve thought about that word, and how to blog it, and the answer came very clear on Sunday as I listened to our minister preach on Romans 12:9-16, with the Apostle Paul’s 17 individual commands all relating to love, commands like “Honor one another above yourselves.”

I started thinking back to all of the people who contributed something – usually themselves – for me to learn and grown in faith. People like:

Pastor Louis Nelson, the minister at our family church (Faith Lutheran Church - Missouri Synod) in New Orleans. He taught me catechism for two years when I was in 7th and 8th grades.

Josh McDowell, the apologist and evangelist, who said something to me in haste that so offended me that I demanded a meeting with the staff director of Campus Crusade for Christ at LSU.

Earle Carpenter, that staff director, who met with me for an hour – I’ve posted a photo of the lecture classroom where we met – and I came out of that meeting a Christian. Earle went on to lead Campus Crusade at SMU, attended Dallas Theological Seminary, and eventually returned to his hometown of Birmingham, Ala., to found Christian Medical Ministry, from which he “retired” a few years back. Earle is working just as hard as he ever did, preaching and teaching the Word.

Pastor Joe Wall, who was one of the pastors at Spring Branch Community Church in Houston and set up classes for college credit that were held at the church (I earned a total of 12 hours). The classes I took in Old Testament Survey, New Testament Survey, the Gospels and Bible Study Methods gave me a phenomenal grounding in the Bible. I still have my research project from Old Testament Survey – a study of the high priests. And I still remember my final exam in Bible Study Methods – an explication of John 11:35, the shortest verse in the Bible (“Jesus wept”). We lived in Houston more than 30 years ago.

Pastor Tim Fortner and his wife Anna, who embraced a young pregnant couple in dire financial circumstances and just loved us. Tim was the pastor at our first church in St. Louis, Covenant Presbyterian Church.

Gery and Linda Kotthoff, who befriended us at Covenant and were our first babysitters for our oldest. You can’t find better examples of selfless love.

Bruce Roquet, whom we first met as a Sunday School teacher at Chatham Bible Church in St. Louis and with whom we joined at First Evangelical Free church years later. Bruce was the youth minister when our oldest was in the youth group, and convinced us to allow him to go with the youth group on a missions trip to Haiti in 1995, shortly after the government had been overthrown and President Clinton had sent U.S. troops in to maintain order. Bruce had as much of an impact on my wife and me as he did on our oldest son.

Professors George Pepe and Ed Weltin at Washington University. I studied under both of them in my masters program. I had two classes with Pepe – “Athens and Jersualem” and “The Idea of Rome in the Western Imagination.” Pepe introduced me to the writings of Tertullian, the Ante-Nicene father who became something of a heretic. And I took a class in early church history with Weltin – and still remember the argument that ensued when I presented my paper on the rise of the monarchial episcopate (the bishops). He disagreed with everything I said, gave me an A for making a convincing case, and even tried to find a journal that would publish my paper.

My family – my wife and two sons. My wife listened to the rants and issues of what had to sound like a crazy person searching for meaning – and then I became a Christian. My two children taught me more about God than I can explain.

The authors I have read: C.S. Lewis, Philip Yancey, J.I. Packer, Charles Williams, F.F. Bruce. N.T. Wright, Sir William Ramsay, Alfred Edersheim, Josh McDowell (yes, I got over the hasty comment) and Charles Swindoll. There are others – but these stand out.

To all of these people living and dead, I owe a debt of gratitude that I can never repay. But I think they all know that.

Tremendous, Glynn. You are so right--our gratitude and thanks can never be expressed enough. Thank you.

You more than epitomize the meaning of "Honor one another above yourselves." And it is my honor to call you my friend.

It's an awesome thing to turn back and say "thank you." Let the other nine sprint ahead.

Glynn, I can't say why, but reading about these wonderful people who made such a difference in your life made me all teary-eyed.

Now I see some of the reasons why you are such a special guy. I'm glad these folks invested in you. There's been a big return for all those whose lives you touch.

What a wonderful example of expressing gratitude, Glynn.
Sounds like you have some pretty amazing people in your world!

Friends often stick closer than family, so says the Bible.
You have certainly been blessed.

So much and so many to be grateful for and to.

I love how you list so many people by name. It makes such a difference when we make our gratitude personal. A beautiful post, Glynn.

Thank you, Glynn, for reminding us of the importance of the impact of our actions. I am so grateful for chains of saints!

God uses people in so many ways to touch us with his love.

It's neat how you listed and blessed those who have touched you, one way or another, even the ones who made you think through things in ways you might not have if the Lord had not dropped them into your life.