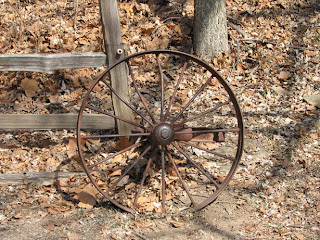 The net result: not much happened. I didn’t go into withdrawal. I didn’t become irritable. I included the BlackBerry in the retreat, and I only checked it a couple of times to make sure there was no crisis going on at work (there was, but there wasn’t anything I could do about it).

It was actually…easy. Far easier than I expected. There were some reasons why.

I had a ton of yard work to do. We had had a frost, and it was time for the tomato plants to be dug up, chopped up and deposited in the yard waste bags. An old (and large) rose bush needed to have a lot of dead wood cut away. Some raking was needed. The frost that had zapped the tomatoes had also blackened the zinnias and other annuals. 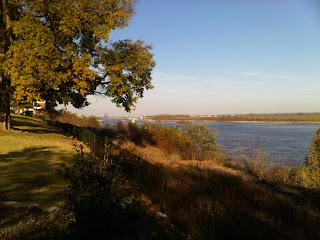 I went for a bike ride about two hours start to finish on Sunday afternoon. The weather was near perfect. I did my usual longish ride from where we live in suburban St. Louis to the Mississippi River. It’s not a major bike ride – about 24 miles roundtrip.

I read a lot. I reread several poems from David Wheeler’s Contingency Plans to finalize the review I had on my blog for Monday and the post at TweetSpeak Poetry for Tuesday. I continued to read Harold Bloom’s Till I End My Song: A Gathering of Last Poems. I waded through a pile of magazines that had been sitting and waiting – an eclectic group ranging from Bicycling and Fast Company to Oxford American, The Writer’s Chronicle and National Geographic.

I did a lot of writing – several poems, two blog posts, an article for the Christian Manifesto (to be published this coming week) and an outline of an article for The High Calling (which may be published next week or sometime later). Staying off the computer meant I was writing everything longhand, and I’ve found my writing is different when I do that. I even had some time to work on the novel-in-progress. Longhand.

Family wasn’t neglected, either. My wife and I went out to dinner on Friday, armed with a coupon for a free bottle of wine at a local Italian restaurant (we got a Merlot from Romania and it was good). On Sunday after church, we met my son, daughter-in-law and grandson (Cameron fix!) for lunch.

Monday morning arrived, and I was back in my online routine, at least until I got to work and had to deal with system glitches. For most people, system glitches are irritating and inconvenient. For an online communications team, system glitches bring everything to a halt. I ended up doing a lot of writing for various projects. Longhand again, but I could have used the computer. Things eventually got close to normal, or at least edged in that direction, but the net effect was an extension of my weekend.

So, my retreat from technology was rather quiet and uneventful. I had no grand spiritual revelations. My communing with nature was limited to chopping and gathering a lot of dead stuff in the garden (and fighting with thorns on that old rose bush). Things that needed to get done weren’t put off and got done. I got some exercise. I enjoyed the family (Cameron fix!) and watched a little college football on TV (LSU, my alma mater, upset Alabama).

Middle Photograph: View of the Mississippi River looking northeast toward Illinois, taken from Bellerive Park in south St. Louis. (Taken the week before so I didn’t cheat on the technology retreat.)
Posted by Glynn at 5:00 AM

I nearly always take Sundays off from technology, with the exception of email-checking. Since my computer has become my work station, I really do have to get away from it for a bit to rest.

I love the everything you got to do that was just living life. Thanks for sharing.

I've been considering doing the same thing. Think I may.

I read about another guy who was planning the same thing and he would be twittering about his adventures...

Good enough to keep up the limitations?

This past summer, we went on vacation to a beautiful home on a lake and several acres of land. Our whole family went (mom, dad, brothers, sister, my son and all their kids) and just set out to relax. We did have a USB internet wifi connection that we brought along and every so often I would check Facebook on my cell phone, but what I found was that I was less technologically inclined and much more family inclined for the week and it was very relaxing!!

A nice reflection that you have shared with us.

that is a pretty photo of the river. the fall colours along with the blue of the water and sky.
interesting perspective, light and shadow.

Congratulations on a successful technology fast! Are you doing it again this weekend? ;)

I took a break last weekend too Glynn. When I finish this, I will close up until late sunday evening. You're right. It is good.

Retreat is always good - change of pace, place or mental space, it works to kill the mud that fills the brain and turns energy into sludge. Enjoyed the fact that you shared it. Today my retreat is going into the techno stuff, reading my favorite blogs and catching up on people who really exist, rather than my usual characters of late who are figments of this writer's imagination and do almost exactly what I tell them. I say almost, because sometimes they rule my hands, keyboard and brain and surprise me with their antics. They they show up on call and disappear at will, unlike the real human being. It is good for me to retreat therefore into the world of writers made of flesh and bone and humor and pathos and other homes of timber, brick and stone.
Enjoyed your little weekend story - you see, you inspired me already! Thanks.