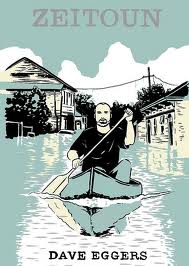 Published in 2009, Zeitoun by Dave Eggers was a national bestseller for a time. I was vaguely aware of it, knew it had to do with Hurricane Katrina, and avoided it for that very reason. Anytime I read about Katrina, my blood pressure goes up. It’s too personal; too many family members were affected and I spent what might have been the worst three days of my life trying to get my mother and aunt out of the city (they insisted on staying through the storm).
But a friend highly recommended it, and so I bought it and have now read it. It wasn’t at all what I expected it to be. It was about the hurricane, and about one family’s experiences. But the real story snuck up and hit me right between the eyes.

Abdulrahman and Kathy Zeitoun and their children are a Muslim family living in New Orleans. He is a native of Syria; she is from Baton Rouge and was a convert to Islam before they met (she’d been raised a Southern Baptist – now there’s a change). They owned an operated a home building/rehabbing/painting business in New Orleans, and also owned several rental properties in the city, several near their uptown New Orleans home.

As Katrina approached, Kathy left with the children and went to Baton Rouge to stay with family; she’d eventually end up with a close friend in Phoenix. Abdulrahman chose to stay in the city through the storm, to protect their home and, to the extent he could, the other properties they owned. For the first week after the storm, he paddled his aluminum canoe all over the uptown area, helping rescue stranded people and even feeding dogs left behind by neighbors. He maintained phone contact with Kathy through a landline that still worked at one of their rental homes.

And then – he disappears. Kathy will not hear from him or of him for more than three weeks.

I expected the story to turn toward the lawlessness and gangs that were roaming the city in the absence of established order. I didn’t expect that it was at the hands of established order that Zeitoun would find himself arrested without a warrant, held without charges, not allowed a phone call, strip-searched, placed in a fenced cell, given food his religion forbade him from eating, and then eventually taken to a prison near Baton Rouge. Only when a Christian missionary smuggled out a message did Kathy find out where he was.

Dave Eggers, who writes non-fiction like Tracy Kidder (House; Soul of a New Machine; Strength in What Remains), tells the story of one family’s experience with Katrina, yes, much like it was the story of thousands of other families, except with a difference – this family was Muslim, and Abdulrahman was de facto suspected by the “police authorities” of being a terrorist.

It says much about the breakdown of law and order in New Orleans and the surrounding region, and the interim order that was restored by the federal government, that his incarceration lasted for weeks. All you really need to know to explain so much of what happened is that this was done under the auspices of the Department of Homeland Security and FEMA.

FEMA couldn’t get food or water to thousands at the Superdome or New Orleans Convention Center. But within three days of the storm hitting the city, FEMA managed to have a temporary prison erected at the New Orleans Amtrak station, a prison that would eventually house more than 1,200 people, with food, water and supplies for guards and prisoners alike. The Superdome is two blocks – two blocks! – from the train station; the convention center is about 10 blocks away.

This is America, an America with a government so frightened that innocent citizens were vacuumed into an anti-terrorist machine while others were dying in attics and on the streets because that machine couldn’t figure out how to rescue them.

The charges against Abdulrahman were eventually dropped. He and Kathy eventually filed a lawsuit, which will wait in line for years with the other lawsuits filed against incompetence, stupidity and fear.

Eggers has told an important story, the story of what can happen when a government charged with protecting its citizens instead turns on them.

I don’t know what to say. No story is ever all black and white, and Eggers doesn’t tell this one that way. I can understand mistakes being made in the chaos that followed Katrina; what I can’t understand is why the mistakes couldn’t have been admitted and rectified. Innocent American citizens and residents were jailed without benefit of having charges made, without a court hearing, without bail being set for weeks, without even being allowed a phone call, and subjected to humiliation, degradation and brutality.

Perhaps Eggers should have borrowed the title of Aleksandr Solzhenitsyn’s short novel about the Soviet Union, We Never Make Mistakes.
Posted by Glynn at 5:00 AM

I read Dave Eggers "A Heartbreaking Work of Staggering Genius..." simply because I thought the title and cover were cool. It was a great read, and apparently put him on the literary map. I haven't read this story yet, and I can see how it might have been too close to home for you... Hope your blood pressure is back down!

You are right to be both furious and ashamed of what US government agencies can do their citizens. But - and it's a big but - the saving grace of the USA is that you are allowed to openly criticise the authorities: something that was never a possibility in Alexander Solzhenitsyn's USSR.
This doesn't excuse the crazy priorities that "free" societies sometimes make. It does, however, offer the hope of tranformation.

I've been reading Eggers' magazine McSweeney's almost since the beginning--though I let my subscription lapse after the DVD edition that showed Joyce Carol Oates and other authors from that issue playing mindless Nintendo games. How could they possibly top that?

The online archives are still a favorite haunt of mine:
http://mcsweeneys.net/archives/

This is a chilling story. It is but one we know about, and begs the question, how many others like it have occurred and of which we have no knowledge, because there is no Dave Eggers to find them and write about them?

The treatment of New Orleans raises so many questions I almost lose my breath thinking about them. And now we hear Bush saying how "disgusting" it was to hear Kanye West call Bush a "racist" and identifying that as the "worst moment" of his presidency. I'd cry if I had any more tears left.

Zeitoun is such an interesting name, that i looked it up to see what wikipedia had to say.

I am glad that this man is telling his story. I hope that the book sells well.