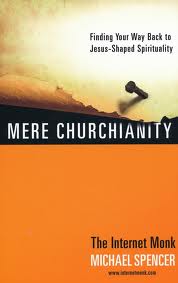 “One of the saddest realities I’ve experienced,” writes Michael Spencer in Mere Churchianity: Finding Your Way Back to Jesus-Shaped Spirituality, "is the large number of people who have no concept of discipleship apart from what their church and its programs offer. Their concept of the Christian life is no more Kingdom oriented or Spirit filled than a meeting of the local women’s club or a Thursday night bowling league.”
The words are rather harsh. Spencer might say the reality is rather harsh, too.

A few years back, so many churches seemed caught up in what could only be called a “seeker craze.” Part of it was driven, I believe, by the numerical success of churches like Willowcreek in the Chicago area and Saddleback in California. It seemed like a huge new industry – consulting services, seminars, training sessions, facility redesign (don’t forget the latte bar), building programs. The leadership of so many churches seemed to distill all questions down to two, which were actually one: how to appeal to “seekers,” and how to grow. Numerical growth – membership, attendance, and giving – became the “measures of success.”

Group think became standard operating procedure. No one was allowed to question. There were even some adult Sunday School materials (from best-selling authors – teaching the Bible seemed rather quaint and old-fashioned) that had sections on how to deal with the “theology police” – people who raised questions about the Biblical soundness of the book being studied.

For many, a major reality check came from – of all places – Willowcreek. A couple of years ago, Willowcreek published an extraordinary statement – that its multi-decade emphasis on “seekers” had shortchanged what the church was supposed to be about in the first place – discipleship, the making and equipping of disciples.

It was only Willowcreek where that had happened. Willowcreek happened to be among the very few churches that admitted it.

First, “Jesus made disciples through relationship and as a result of observation.”

Two, “Jesus made disciples out of these followers through their constant exposure to his teachings.”

Three, “Jesus put his disciples in a variety of situations that took them far beyond their comfort zones.”

Four, “Jesus allowed his followers to experience the power of the Holy Spirit for themselves.”

Six, “Jesus created disciples by the power of the Holy Spirit illuminating the gospel in retrospect.”

And seven, “Jesus created disciples who were called and centered in the gospel announcement of war God was doing at the time.”

I read this, and I tremble.

I don’t know this discipleship.

I haven’t seen it for along time.


Nancy Rosback over at Bend the Page has been leading us in a discussion of Mere Churchianity, her post today is "Are you looking at me?" Also see Fatha Frank’s postings at Public Christianity, including "Of Sandlots and Cathedrals," and Melo's "Where We Meet."
Posted by Glynn at 5:00 AM

Gotta admit Glynn that I don't do a very good job of this. I am not tied into the seeker movement by any stretch but find myself woefully short in this department. Michael makes a good case for biblical discipleship. Now...if I can just figure out how to do that.

Whoa. Hold on. I don't feel comfortable here. Jesus, where are you taking me?

Glynn, I have so many thoughts on where Michael is taking us there's a bottle neck and pressure is building behind. Terrific post. I don't see this kind of discipleship either. I'm not sure I'd recognize if I did see it. And that breaks my heart.

Anyway, I need to pray about this one before I get my thoughts down on the screen. Thanks for the food for thought.

A true work of the Holy Spirit ...

...and they were never the same afterwards.

reading
thinking
reading again
thinking again
and so on

Out of our broken church, the ones pushed out for not being with the program look the most organic to me, they are a house church now and the service is fairly interactive -- neither group has grown (if growth were the object) by leaps and bounds... but it is the most experimental and creative to me. They were dismissed for not being seeker-friendly.

Following a little homework on prophecy/inspiration, at least one very unexpected someone(someone who scoffed at the whole idea) did her homework... a few simple words of inspiration out of the blue. Another seeing this gave it music, and it became a song. I found that interesting.

I don't know for sure, but it seems like whenever you conform on command you become less you, less interesting, less real. That does not attract. However, a focus on attraction and attractiveness is what got us in this mess in the first place.

Glynn, thank for your posts on this book. I'm not always sure I want to go there, but I'm okay so far.