Paper Flowers in the Sixth Grade 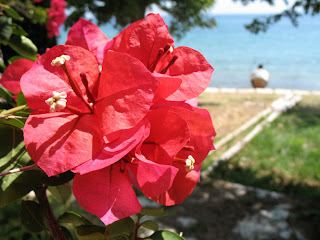 I was reading (it was free time) and
it was likely something from the
Scholastic Book Club, Leave It to
Beaver: The Novel or Triple Trouble
for Rupert or some other weighty
literary masterpiece, when I heard
a commotion in the back of the
room, an explosion of colored
tissues and half-finished paper
flowers as if a volcano had erupted
in a rainbow of paper and tears.

William, tall and skinny and the object
of much bullying from some of the boys
and a few girls because he was tall and
skinny and displayed a tendency to
drama or melodrama or hysterics or
a combination of all three
(something boys didn’t do in sixth grade)
(something boys didn’t do in any grade),
had been sitting with some of the girls,
chatting like they usually did and
making elaborate paper flowers,

a kind of 11-year-old echo or sign of
knitting and crocheting to come, when
someone, a boy or girl or even the teacher
said something admonishing or mean or
obvious and William flared in outrage and
sobs, jumping up in a combustion of colors
as tissue papers flew from his lap. We all
rushed to the windows, like watching a
movie at the Saturday matinee, one of
those awful things like Jason and Argonauts
from the original Italian dubbed in English

(we loved those movies) because this had
happened before, to watch William run
across the street, a large paper flower still
in his hand and three yellow tissues still in
the pocket of his jeans, to his house two
blocks away. Perhaps the color of the
tissues had run together with smeared
tears but we never saw William in class
again; we never saw William again, as if
a tornado of paper flowers had carried
him away, perhaps to land on the witch.

Nearly half a century later I walked
by that corner where William had
lived and all that was there was
a concrete slab, broken in pieces.
Like William, the house had vanished,
most possibly in a mass of elaborate
paper flowers swept away by
a cruel wind. I stopped and stared
at the slab, smaller than it should have
for a house, and wondered if William
still held that paper flower in his hand.

To read other poems submitted for One Shot Wednesday, please visit the One Stop Poetry blog.

Photograph: Paper Flower by Petr Kratochvil via Public Domain Pictures. Used with permission.
Posted by Glynn at 10:00 AM

Email ThisBlogThis!Share to TwitterShare to FacebookShare to Pinterest
Labels: One Stop Poetry, Poetry

glynn that was awesome...i was entranced with william as i knew a few like him...i could have been him...only i was small not tall...and nice nod towards oz...

This is heartbreaking, because so many of those Williams decide that life is too painful, and disappear completely and forever.

And my word verification is "realize," sound advice for us all.

this was heart-touching glynn!
i felt for him - and i love the paper flower that winds like a red thread through the poem

I had so many images as I followed along with you. At first I thought you were the teacher and this poem was present day. I became more and more intrigued in your flow and description. You really kept me involved and the fact that it was a memory...so beautifully put. Lovely One Shot xo

Used to teach 6th grade, Glynn. Your poem brought me back, especially when you discuss the behavior of the kids. Excellent poem.

you just broke my heart - the last lines are particularly poignant and tie the whole poem up while at the same time leaving room to wonder...

And that one is a real heart-breaker Glynn..i join all feeling for William..you really did well in that one! ok..its that AWESOME! :)

Intriguing story! I was also curious as to what had become of William.At least he's immortalized in poetry now.

Glynn
Thanks for that I know alot of Williams and know they would appreciate the sentiment behind this piece. Children sometimes forget to be kind - adults sadly can also forget.

Tissue paper flowers for the Williams in our world

Thanks my friend for sharing with One Shot

so touching and real

Emotional and vivid...I felt empathy for poor William and I hope he is doing well.

This made me cry. It is beautiful.

An amazing piece, and a touching story...Thanks for sharing! Thanks so much. =3

Dear Glynn
So poignant and beautiful. I liked it. A beautiful story ... thanks for sharing...

Poor kid...children can be so cruel sometimes. Heart-touching piece, full of feeling and a sad sort of reflection. Good job relating the story, very emotional--very touching.

heartbreaking truth of the child within all of us... how the honesty can be cruel. or the cruelty can be honest.

This really drew me in. I want to know where he is today. I hope he's okay!

Love this so much. very touching and I really want it to go on like a few others have said. I would like to know what happened to him. But your imagery leaves me with an explosion of beautiful vivid colored petals, leaving me some hope of his happy existence.

That was engrossing and so sad ! I think william is gonna be in my head for few more hours ! great post :)

PS : you gave me an idea for a poem about an incident in school. Will link back if i write it soon :)

So many Williams. So sad when it happens.
Excellently done.

that was moving....so well written...and so many times do you read of this happening....a great one shot

Willaim, this is beautiful. So tender and so discriptive. I feel like i know the boy.

very touching, esp this "most possibly in a mass of elaborate
paper flowers swept away by
a cruel wind"

Sometimes its too late when we understand this William... nice poem...

I was just talking about a "William" I knew in school, and was wondering what happened to him. Your work is a poignant tribute to those who maybe only God understands. I wish I had been braver, able to step out of the box and be a friend. If not then, now.

I love your work! I am glad I discovered your blog at One-Shot.

Geez, there is such raw emotional truth in this poem. I think we all have known a William....or been William? at one time or other in our childhood?

A haunting poem, here. It swept me up and carried me without stumble.

This is fabulous, such exquisite and visual layering of detail and direct speaking-voice style. Bravo! xxxJenne'

Glynn, you really got to me with this one. When I was about the same age there was a girl in our class who was the subject of bullying. I often think of her and wonder what's happened in her life. I wasn't part of the bullying itself, but as a passive participant, I still hold the guilt.
Thanks for visiting my blog.
Victoria

And perhaps William is now the strong--leading others, like his old schoolmates who now bear broken hearts caused by lack of insight, into a surgery of the soul that will bring new vision and healing. These stories aren't always redeemed, but it's beautiful when they are.

They are so vulnerable at that age, still unable to pretend their feelings aren't hurt unlike us grownups.

This is a stunning piece! what a gift..your words are powerful...I felt a relationship with William...striking poem for one shot!

My heart bled while reading this..
Thank you for sharing this piece of your work... :)
Thanks for the visit...

That one leaves the mind wondering. It also leaves an echo of sadness. Wonderful visionary, an excellent write.

How sad! Thanks for telling his story. Bullying and its terrible consequenes is very much in the news these days.

What a beautifully sad tale. It make me so curious as to what really happened. Well done.

Someone is Special said...

Glynn, this was awesome..

Very touching piece. I've known some Williams, myself. Thanks for stopping by my place.

Oh Glynn, such a powerful story you weave. Sad, but one can only hope that perhaps he found his ruby red slippers to take him home.

This is a great piece! I love narative poetry, am trying to work on teaching myself to write it. I really like this, it makes a movie in your head as you read. Great memory, well, not a happy one but so vivid! Thanks for sharing!

What a post – the color and the flowers add a sense of contrast to the events unfolding. My heart was with William.

I love the conversational ease here, and the mix of fantasy and regular life. Nicely done!

Pass the tissues, there's water in these lamps!