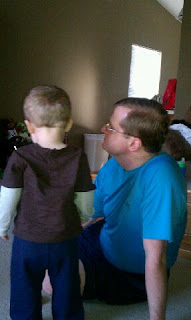 A week ago this past Saturday, I bopped on over to oldest son’s house to drop off some stuff and, of course, to see the grandson. Cameron just had a checkup at the doctor’s office, and he’s 32 pounds and just a smidge shy of three feet tall. And fast.

As I pulled into their driveway, I looked up and saw him peering out of the window. It was a nice day, the windows were open, and I heard my son say to him, “Cameron! Who’s that? It’s Grandpa!” He sees me get of the car, and disappears from the window.

It’s often been said that grandparents and grandchildren have to conspire against the parents. Cameron and I don’t conspire. We just play.

And I’m learning the gift of grandparenting, and what it is that grandparents give children that parents too often can’t – their total undivided attention. When Cameron and I are together (and this is true for Cameron and his grandmother as well), we don’t worry about anything else. We don’t care about work, or cutting the grass, or cleaning the table, or the multitude of projects needed to be done around the house, or getting the car serviced, or anything else except each other. Parents have to deal with a lot of other things; grandparents give those things up and don’t think twice about it.

Courtesy of a friend who works at the St. Louis Cardinals, my son and daughter-in-law were able to get tickets for the seventh game of the World Series. My wife and I got to babysit Cameron. I’m thrilled the Cardinals won, of course, but I think I got the better deal that night. We played for a while, and then we took off to Olive Garden for dinner. Cameron was extraordinarily well behaved for a toddler, and the only challenge was keeping him from eating the orange crayon (he preferred the orange crayon to the dark green). We went back home and played some more, and then he went off to bed.

It was a perfect evening.

Babies and children are a huge amount of work. It takes extraordinary amounts of energy just to keep up with them. And we’re glad our parenting days are behind us.

But to hear that little squeal of delight, to feel those little arms hug your neck, to listen to that chortle of laughter when you do something goofy – there are very few things more delightful than those. Very few. And when I think of them, I’ll let you know. 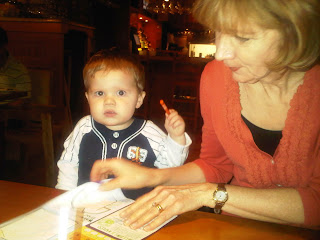 Over at Faith Barista, Bonnie Gray is hosting a blog carnival on faith. This week’s prompt is “a recent gift from God.” To see more posts, please visit Faith Barista.

Photograph, top (by Stephanie Young): Cameron and Grandpa doing something weird but funny during the LSU-Auburn football game. Bottom (by Grandpa Young): Cameron with the orange crayon at Olive Garden with his grandmother (note the suitable baseball attire; it was the night of game 7 of the World Series, after all).
Posted by Glynn at 5:00 AM

Glynn, thank you for sharing your gift from God with us.

He is a beautiful gift.

What a beautiful sound that "squeal of delight" must be.

The gift of playing : ) I love it. God bless you and your family! I will take some time out for playing today too!

Only a grandfather would say he'd rather be playing with a child instead of cheering at the 7th game of the World Series. :-) That's a lot of love, Glynn. I look forward to experiencing it one day. Way to go, Cards! They're my favorite baseball team.

We won't talk about the LSU-Auburn game (War Eagle). Saturday's game should be a good one though.

Love soaks your every word ...

Oh, goodness, yes. Children (kids or grandkids) are SUCH a constant blessing. Truly gifts given by grace.
Thanks for sharing this sweetness, Glynn.

Hi Glynn, thank you for sharing the joy of granparenting without making us mommies feel guilty for doing life with toddlers! In fact, we already are fighting mommy guilt. :). Your post made me miss having my in-laws nearby! I can't wait fir them to visit. Btw, I'm pretty impressed you took Cameron to the Olive Garden!! Wow. Advanced level you are! Thanks, Glynn!

Awwwww, Glynn, this is just so sweet. So much love shining brightly through this reflection.

I remember my babies waiting at the windows for my parents to arrive and jumping up and down with delight when they drove up. Grandparents are a gift as well.