I’m reading a book of private detective stories, Chicago Lightning by Max Allan Collins, and I’m hooked by the second age of the author’s introduction. Collins and I grew up on the same kind of television fare – and the same love for detective and mystery stories. 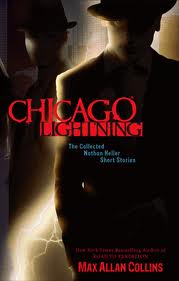 I watched westerns as a child – programs like Gunsmoke, The Rifleman and Bonanza – but it was the detective and mystery shows that I loved. Peter Gunn. Dragnet. Perry Mason (my Southern Baptist grandmother adored Perry Mason novels). 77 Sunset Strip. Hawaiian Eye (remember Connie Stevens as Cricket?). Mike Hammer.

My reading followed similar lines. From Trixie Beldon and the Hardy Boys I moved on to mysteries with real murders by writers like Agatha Christie. In the 1970s, there was something of a renaissance for the hardboiled detective novels, with new editions of books from the 1930s and 1940s. I read all of Dashiell Hammett’s novels, like Red Harvest, The Continental Op, The Maltese falcon and The Thin Man. I read Raymond Chandler’s novels, too, but preferred the almost literary prose of Hammett. Than I discovered S.S. Van Dine and the Philo Vance mysteries.

I moved away for reading almost solely mysteries but never abandoned the genre. After an extended romance with science fiction, I went literary and read the Latin Americans – Gabriel Garcia Marquez, Mario Vargas Llosa, Carlos Fuentes, Octavio Paz, Pablo Neruda and others. For about 10 years I was the Latin American and Spanish fiction reviewer for the St. Louis Post-Dispatch. I still read some today, and have a novel by Carlos Fuentes waiting on the shelf.

The Latins, interestingly enough, led me to a popular Spanish writer named Arturo Perez-Reverte, who has written a number of semi-literary mysteries that are wonderful stories. Lately he’s been producing the Captain Alatriste novels, set in the declining Spain of the 17th century.

But I still enjoy mysteries. I’m tending to stick more in the Christian mystery category, more because few mainstream mystery novelists seem to have to get too graphic with sex and violence. And despite my love of mysteries, I do not like violence. I don’t like it in movies or on television (which tells you how many movies I see and how much television I watch).

I like a number of British mystery writers, like Colin Dexter of Inspector Morse fame and Ian Rankin, who’s written the Inspector Rebus novels. But these days most contemporary mysteries are police procedurals or something similar, which are fine but don’t have the flare of those old private detectives, the guys who are tough as nails, pack heat and aren’t afraid to use it.

I enjoyed the stories in Chicago Lightning. They contain a few graphic scenes, but the scens seem to fit the stories. The hero, Nate Heller, is cut from that same cloth that produced Sam Spade, Nick Charles and Philip Marlowe. These aren’t the “solve the puzzle guys” so much as the “get the truth even if you have to beat it out of them” guys.

As odd as this might sound, reading these stories reminds me of my father. He grew up in that period when Hammett and Chandler and all the rest were at the height of their powers. He read a lot of them, too. And the stories he told of his experiences in working in the East Texas oil fields and the Depression-era newspaper business had that same kind of flavor to them. Although I can’t recall any murders or serious crimes in his stories, except for one he told about his grandmother that became part of the family legend. Did she or didn’t she?

I think I hold that story in reserve. It might make an interesting historical short story.
Posted by Glynn at 5:00 AM

I remember all those TV shows. I was born in 1960, so I was a youngster. I've always loved the old detective stories.

I love a good mystery too.

Crime fiction. No thanks.

But give me a good gum shoe and I am hooked.

I love Bruce Alexander. You read him?

I read many mysteries, from childhood-range forward. However, just as you said, when things became too graphic, I had to set them aside. For a few years, I could watch them on TV... especially "Perry Mason" and "Murder, She Wrote" and "Matlock"... and a few others. But when the newer ones became too graphic, I've had to set that aside, too. [Men don't struggle with that quite as much, I've notice.] Keeping the brain seeking answers, asking questions... that's the key for my love of mysteries. Thanks.