We have two sons, born almost eight years apart. There’s a reason for that. The first one was such a tornado that we didn’t think we could manage another – and stay sane. But we did manage the two. 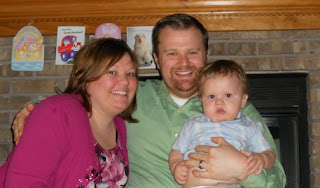 Travis is now 31; Andrew is almost 24. They are about as different as you could find. The one thing they have in common is that both wanted to go to colleges far, far away, and both ended up at the University of Missouri. The university did manage to survive.

Travis walked at nine months, for exactly one day. Then he ran and didn’t stop. From early on, he was a sports fan. Any sport. Baseball became his favorite, but he’d watch anything with a ball. When he was five, we found him awake one Saturday morning watching TV – a golf game.

He was (and still is) a natural in front on the camera. Mugged for it, in fact – he loved having his picture taken.

Andrew also loves sports, but he’s more selective about it. He loved playing basketball, and he did play in high school, but he didn’t get his growth spurt until after he graduated. He was a quiet and extraordinarily shy child.

Travis is our salesman. Put him in a roomful of strangers and he’ll know most of them within 30 minutes. He is large and in charge, and you always knew when Travis was around. In the scholarship department, well, let’s say Travis was smart about the things he wanted to be smart about. We read to him as a child, oh, did we read to him; both of his parents loved to read and we just assumed he would love books, too. Winnie the Pooh. Chronicles of Narnia. Fairy tales. His idea of a good book: listening to the audio tapes of Superman, Batman and Justice League of America stories. Preferably with others around – being solitary was not his idea of a good time.

Andrew loved having friends, but he went in for more solitary pursuits as well. He rode the Harry Potter book craze. He took up the clarinet – a surprise, since no one else in the immediate family played an instrument. He even played for the school band through high school. In his sophomore year, he came home from school and totally shocked us with the announcement that he’d like to go to Australia for three weeks with the People to People program – three weeks, thousands of miles away, with kids he had never met before. And he followed through on what he had to do and went. He went snorkeling at the Great Barrier Reef, slept outside on a ranch to wake up to frost covering his face (it was winter there), lived for three days with a family in Sydney and went to school with one of their kids. He came back a different, far more confident young man, and loved the program so much he went to Europe the following summer. 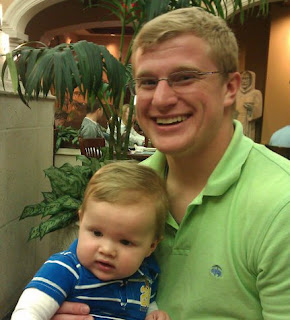 Travis started college as a business major. It didn’t take long for him to find the closest thing the university offered to sports marketing – which turned out to be in the College of Agriculture. After he graduated, he worked in sports marketing for a semi-pro baseball team in the St. Louis area. Then he got wind of an opportunity with an expansion league in the West, and packed off to Phoenix. The league went bust (the investor owners wanted profit in the first year and that wasn’t likely to happen) but Travis looked around and landed on his feet, going to work for a Marriott franchise. He met and married Stephanie, but he was not meant for staying in Phoenix long-term. His St. Louis roots called him back home; he’s a St. Louis kid if there ever was one. He’s got a manager position with the biggest Hilton in St. Louis (the Ballpark Hilton, right near Busch Stadium; what a surprise for our sports child) but was eventually assigned to turn around another property in suburban St. Louis. Which he has.

Andrew started the University of Missouri in the College of Business and stayed there, getting a degree in finance. After graduation, he went to work for Farmers Insurance in Kansas City in one of their two U.S. claims offices. One brutal winter later, he decided he was more interested in a warmer climate, and is now working for Farmers in Florida. He likes the work, which requires a lot of initiative and being a self-starter. I think back to that little boy hiding his face from the camera, and am amazed.

They are eight years apart, and very different in so many ways. And yet they have remained close. As a child Andrew adored his older brother; Travis was always thrilled to have another kid in the family. When Travis got married, Andrew was his best man. Travis’s first child is named Cameron Andrew (I say first child because the second is due in May).

I’m proud of both of them. We worried over both; we still do. But they turned into pretty cool adults. Last night, Andrew braved the Thanksgiving airport madness and flew home. We have them both together, along with Stephanie and my grandson.

Two fine young men. Two brothers. Two sons I give thanks to God for giving us.

This post is part of Bonnie Gray’s blog carnival on faith over at Faith Barista. Today is all about Thanksgiving; to see more posts, head on over there.

Glynn -- What a wonderful tribute to your boys, your men. There are so many stories of two sons, two son who walk such different paths. I'm glad the paths of your boys seem to crisscross. Happy Thanksgiving!

Ok. So you're not supposed to make me cry this early in the morning.

What a beautiful picture of two amazing human beings. What wonderful reflections of their parents.

And WOW! I didn't realize there's another grandchild on the way. How exciting!

I love how you know the details of their lives - that is love. God bless you, Happy Thanksgiving...and when you visit in Florida - stop by and see us.:-)

Glynn, you are blessed to have a wonderful family. Enjoy every minute that you have with them this holiday and always. Happy Thanksgiving to all of you!

So thankful you're all together, today. Sounds like a wonderful family. God bless.

What a privilege to get to "meet" your wonderful young men, Glynn. Thank you.

Enjoy, enjoy, the blessings of family this Thanksgiving. And congratulations on grandbaby number two!

A lovely post, Glynn. May Thanksgiving be a bounty of blessings for you and yours.

Adding my wishes to the others. And admiring both the parents and the sons!

so nice to have a day together.
have a thankful giving day!

Awesome sons Glynn! You sound absolutely thankful for them.

I found a letter from my dad after he died that mentioned me and a few of my accomplishments. I treasure the words he said about me. Your sons will too... and their sons. You are a huge blessing to them, I know. Happy Thanksgiving to your beautiful family.

You make me wish I knew them Glynn!! It is wonderful how each child is so unique right from the beginning, before we have anything to do with it.

Blessings on both sides, up and down the family line.

What beautiful love you share. And, yes, children do amaze and astound, don't they?

Glynn, it's so nice to hear a father write so much in detail about his knowledge of his sons. What a blessing. It also encouraged me with my two boys -- God already has some pre-sets in them, and it's not all on me - it's hard to know how much I'm to influence & how much is just not going to budge. :)