Arturo Perez-Reverte’s “Pirates of the Levant” 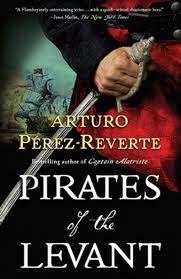 I will have to admit up front that Arturo Perez-Reverte is one of my favorite authors. Years back, I discovered him accidentally by looking for a novel by mystery write Anne Perry – and Perez-Reverte was right next door (it was a Barnes & Noble, in case you’re interested). The novel I picked up was The Flanders Panel. I bought it and read it, and returned to the bookstore to find everything else I could be the author. Then I went to Amazon to find whatever the bookstore didn’t have.
Then Perez-Reverte began a series about Captain Diego Alatriste and his sidekick, young Inigo Balboa (who is also writing the tales as an old man long after the events). The books are set in 17th century Spain, and they are full of swordfights and romance and palace intrigue and suspense and loads of history about the period.

Pirates of the Levant is the sixth of the Alatriste novels. And it is decidedly different from its predecessors, in that there is no overarching story that frames all of the events and actions. (In The Cavalier in the Yellow Doublet, for example, the overarching story is the rivalry between Alatriste and the king of Spain for the attention of the same actress; it tells you a lot about Alatriste that he knows you don’t compete with the king of Spain but stays involved anyway.)

Instead, what Arturo-Perez does in Pirates is to draw a series of stories about Spanish ships patrolling the Mediterranean, fighting pirates and Moors. Alatriste and Balboa are aboard one such galley, and the reader experiences the seagoing life (including that of the galley slaves who man the oars) with the prodigious research the author brings to the each book. The story culminates in a sea battle that looks impossible to win, or even survive.

The point here is what constituted military life at sea during the period. Far from the court intrigues of Madrid, Alatriste and Balboa move from one battle to another, one encounter to another, punctuated by the occasional serious conflict but mostly experiencing a kind of sameness, like life upon the sea is often depicted.

Pirates of the Levant is still a good story, but it is a different kind of story than Perez-Reverte has told before. But it does have all of the richness and historical detail one expects from his fine and entertaining novels.
Posted by Glynn at 5:00 AM

I find it disconcerting at times when an author I like 'changes' -- lol -- like author's too aren't evolutionary.

It is the style. As one friend said to me -- whatever I read of yours I know I'll always get a poetic style.

Thanks for the great review -- another thing I find reassuring -- your writing always touches deep, peeling back the surface to reveal some gem of wonder inside, no matter what you're writing about. It's your style.

I'm sorry --for the deletes. I haven't had enough coffee.

I wanted to say thanks for the review. I love historical fiction, especially of a time period of which I know little about, as if they makes any sense. LOL

About ten years ago, a cable channel did a mini-series based on the Horatio Hornblower books by C. S. Forester. I was so inspired I went back and read the novels and then "hooked" my nephews on them.

BTW: I recommend both of those -- movies are quite good -- books are great fun to read.

Is this series for young readers?

i like the way that i can look for books on a shelf in a bookstore, and run onto other books at the same time.

you just reminded me of that benefit.