We were in New Orleans last week, visiting my mother and friends and playing tourist. We ate well, too (something easy to do in New Orleans) – shrimp po-boys, red beans and rice, blackened tilapia with crabmeat, BBQ shrimp stew, café au lait and beignets at Café Du Monde – what’s not to like? Like this picture below – my wife holding a plate of beignets (powdered doughnuts). 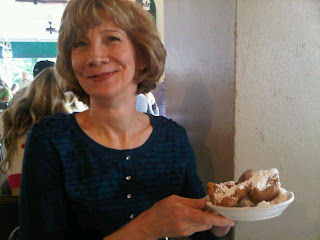 I walked almost every morning through the streets where I grew up. It’s amazing how one can associate houses and streets of childhood with vividly clear memories and stories.

There’s the garage window, now hidden between two palms, where the snowball lady handed out cone-shaped cups of flavored ice every summer for a nickel. 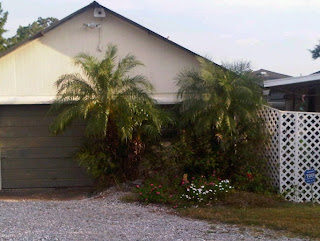 There’s the house where Meany lived – she kept every ball than landed in her yard and so earned her name.

Or those two backyards that were part of the field where we played baseball, right next to the woods. The woods have all gone to houses, too, but I still remember how the trail wended through the trees and scrub so thick that you could lose sight of anything to do with civilization.

And the ditch, now covered over, that we knew contained “polio water” – fall into it, and the disease could get you. Of course, we all fell into it at one time or another; no one got polio but the disease held a huge influence over our minds, even after the Salk vaccine.

I walked by my old elementary school several times. It looks radically different than what it was when I was there (first through sixth grades). The building that houses my third grade classroom has been demolished (it was already decrepit enough to need demolishing when I attended class in it). The entire school now has red tile roofs on all the buildings; the roofs used to be flat and prone to leaks. 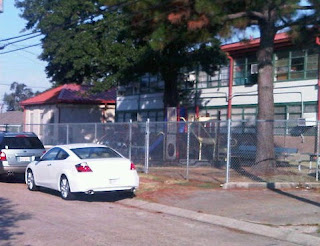 Only one of the school buildings looks even remotely like what I remember – the two-story classroom building where I attended fourth, fifth and sixth grades. I remembered the fifth-grade class play – Pollyanna. I played Jimmy Bean, the heroine’s young friend. And singing songs in the sixth grade, mostly patriotic ones that today would be considered chauvinistic and militarist.

Gone, too, are the trailers – the temporary classrooms installed to handle the Baby Boom.

And the faces of memory – Paul Laborde, my best friend in the second grade; Brigetta Arwe, my fellow third grader whose family had emigrated from Germany; my first-grade teacher Mrs. Balser, who told us there was no such thing as Santa Claus and faced the wrath of irate parents; my fifth-grade girlfriend, Mary Ellen Shanks, who moved away the following summer.

Home is a special place. And place can be a powerful thing, reminding us all of the ghosts and mists from our childhood.
Posted by Glynn at 5:00 AM

This makes me really miss Ohio.s

Home is a powerful place. You rush to leave it, but then it draws you back.

I sometimes yearn to be like 'other kids' who have place memories of childhood. We grew up moving around -- no place to go back to where I went to grade 1 to 6. I'm adjusted to the value of having lived in several countries by the age of 10 -- but I do wonder about having such deep roots as yours. Quite lovely!

You have here the stuff of some wonderful poems.

Thanks for sharing your memories. You write of them as vividly as you remember them.

Yes Gylnn, home is most influential on our core beings.
Our most life shaving stories are from back in the hood, are they not. What is another story from then Glynn? This inquiring mind wants to know. Great images...written and visual.

like a little poem tucked in at the end.

Those kinds of journeys are incredible. And you made me hungry with all the talk of that delicious food. :)

To travel the streets of childhood -- is a wonderful journey. From time to time, I visit the old neighborhood where I grew up -- but so much has changed .... my elementary school razed, my high school now a middle school -- and no one I know lives there anymore.

I have never visited New Orleans --- should I? I hear so -- just for the food.

Childhood memories can be so sweet.