While we were in New Orleans last week, we did some roaming through the French Quarter. The weather was fantastic – highs around 80, low humidity and sunshine – perfect for roaming.

We wandered around Jackson Square and St. Louis Cathedral, walked up Royal Street (a pedestrian mall during the day), looked around some shops, and the walked back down Royal, where we were suddenly confronted by none other than the Lizard Lady (that’s what she called herself), a street performance artist who turned her Boom Box on and did odd, lizard-like movements while the music played (the music was odd and lizard-like, too). 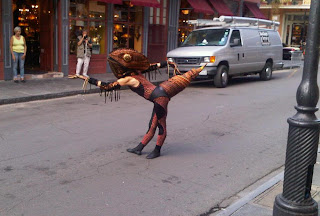 Another block down Royal, we turned into Pirate’s Alley, where one of my favorite bookstores in the world is located – the Faulkner Book House, in the house known as the Faulkner House (where William Faulkner lived in New Orleans and where he wrote his first novel). Immediately after the picture below was taken, I slipped inside the shop (tiny by any comparison) and browsed the poetry section. Yes, I walked out with books of poems by Marianne Moore and Wallace Stevens, and a couple of others. 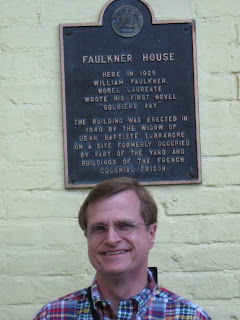 Walking alongside the cathedral toward Jackson Square, I looked up, and saw this view below. I thought of Claire Burge, the photography editor at the High Calling, and her conversation about the rule of thirds. Out came the trusty smart phone. 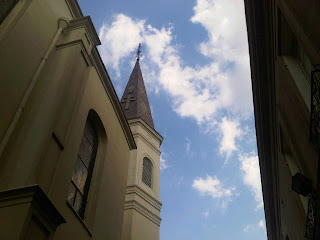 After coffee and doughnuts at Café Du Monde, and more shopping (more books!), we walked along the New Orleans riverfront where my wife was serenaded by an older man with a guitar and I made a $2 donation.

The French Quarter has changed over the years, but it’s always had lots of traffic around Café Du Monde on Decatur Street, artists hanging paintings on the fence around the square, tourists walking around looking like tourists, an always interesting collection of inhabitants, a highly tolerant attitude toward all kinds of behaviors (taken to extremes on Mardi Gras Day), and really fine restaurants mixed in among the really not-so-fine restaurants (and it can be hard to tell the difference until you eat the food). I had the BBQ shrimp in broth at Mr. B’s Bistro on Thursday night, and it was excellent.

What was personally encouraging was to see how crowded the Quarter was; the city is slowly but surely coming back after Hurricane Katrina. And in a city always ready to look for a new and insulting way to make a buck, I saw t-shirts for sale that read “BP – Big Polluter.” Yesterday, BP’s CEO reported that the damage reports from the Gulf of Mexico oil spill had been exaggerated by the media. He should have been with me at the Come Back Inn when my order-taker gave me a look of total disbelief when I asked if they had oyster po-boys. You can find oysters in the city, but you won’t find the large Gulf oysters. I’m sure their demise has been exaggerated, too.

You don’t find a lot of people who live elsewhere and are “from New Orleans.” Natives tend to stay. It’s the food, yes, but it’s also a lot of other things, mostly the people and how they hold both pessimism and optimism together in a creative tension. It’s the place I’ll always think of as my hometown, and there’s more of it in me than I’ve realized.
Posted by Glynn at 5:00 AM

Glynn, I really enjoy your travelogue- it's as if I'm on the trip with you! The combo of photos and narration make for a great tour, and I slipped into that bookstore right behind you.

Glad to hear New Orleans is coming back strong.

Not only do I love Faulkner's connection to New Orleans, but to Sherwood Anderson who apparently encouraged Faulkner to write about "what he knows." Quite a piece of good advice -- writer to writer, don't ya think?

What a pair -- such different writers -- such interesting men.

I enjoy your travel stories too.

Of course, I just enjoy almost everything you write. I'm that much of a fan.

I have to tell you, I am really captivated with your stories and the photos. Really makes me want to save some money so that April and I could go.

I can almost feel the atmosphere as we walk down the street in your words ...

My husband would have loved to see that bookstore! Hmm. Maybe I should start planning a trip. I may be back to you for advice!

You make me crazy for cafe au lait et beignets.

New Orleans is one of our great cities. Love the Lizard Lady.

You should work for New Orleans tourism. After reading your posts, I totally want to go spend a few days there. I've been through there, but never spent any real time in the city. Sounds amazing.

"they hold both pessimism and optimism together in a creative tension"

What a great description. In all my visits to the French Quarter, I always felt a presence there that I've never felt anywhere else. Something other-worldly. Perhaps old ghosts roaming the streets making sure that its history remains there. Weird, huh?

I'm with Cassandra...my husband would love to see that Faulkner bookstore -- he's a big fan (me, not so much). I've never been to New Orleans -- thanks for this trip in words and pics. Hope I can get there myself some day.