What Happened in College

When we were in New Orleans last week, we took one day to head down memory lane and drove up to Baton Rouge to see LSU. I could write volumes on what happened while I was in college, but three things stand out.

First, I started LSU as a freshman in pre-med. I was going to be a doctor, which had been my father’s own career dream until the Great Depression short-circuited any hope of college (he graduated from high school in 1933). I came out of LSU with a degree in journalism, which was a much better fit for my personality and talents even if it would never put me anywhere close to the same socio-economic status as a doctor. 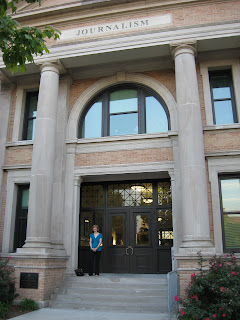 Last week, my wife and I walked though the Journalism Building. It’s radically rehabbed and redesigned form when we had classes there but recognizable enough to identify “This is where I took newspaper and design” and “they was the Law of Journalism class.” What had been the office of the school newspaper (The Reveille) is now a computer lab.

Second, it was in that office of the Reveille where I met Janet, and we were married seven months later. I was the newspaper’s managing editor for my last semester as a senior – responsible for everything except the editorial page. I had four copy editors, three photographers, an arts editor and a sport editor reporting to me, along with 30+ reporters. It was crazy, and I loved it.


I spent long hours in that newspaper office. Within a few weeks of the start of the semester, the campus was hit by a flu epidemic. All of my copy editors got it; my sports editor got it; two of my photographers got it; and several reporters. I was spared, but for weeks, I worked from 11 a.m. to 6 a.m., editing, running my one photographer ragged, writing, laying out all of the pages, cajoling painstaking reporters who were perfectionists about what they wrote (I won’t mention any names but I married one), and then delivering all of the finished copy and photos to the printing office at 2 a.m., waiting around while the typeset was produced, and then pasting up the paper for printing at 6 a.m. We published four days a week.
The third thing had to do with my faith. 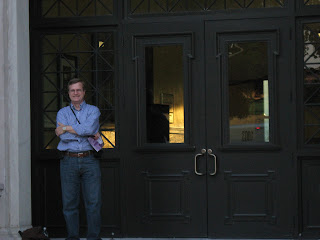 Right across the street from the Journalism Building was Lockett Hall, housing faculty offices on the upper floors and large lecture rooms in the basement. Those were the classrooms I took two classes of U.S. history, Louisiana history, Russian history and “Introduction to Fine Arts,” a lecture class complete with slides always held in a darkened room and perfect for taking naps.
In one of those classrooms, on Jan. 26, 1973, about 9 p.m., I was led to Christ by the campus director for Campus Crusade for Christ. In the picture below, I’m sitting in almost exactly the same position I was that night (the seating is a lot newer but similar). 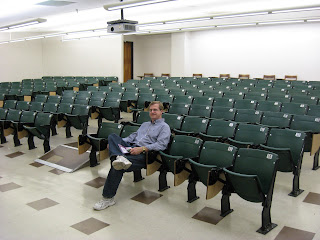 An interesting side note is that when we walked into the classroom last week, there was a pocket-sized copy of the New Testament/Psalms/Proverbs lying on the floor, very close to where I had sat that night. I left it on the desk near the podium.
Who knows, some student journalist might walk in and find it.
Posted by Glynn at 5:00 AM

Wow Glynn thanks for the trip.

And to think that Seed planted in you so many years ago still bears fruit.

And the irony to find the Word there for you to plant for another to find - It could save their life.

I'd like to watch the rest of the story... or maybe you'll finish it for us.

God's Word will not return void.

That's really interesting Glynn, especially the picture of you back in that seat. Amazing too that you and Janet could work together in the newspaper office and still decide to marry each other:)

We share our connection to CCC in common ... I became a Christian through their high school ministry in 1982. Sounds like you had a wonderful trip, Glynn ... thanks for the stroll down memory lane.

Ah, very cool Glynn. Love the walk down memory lane. Isn't it cool how God speaks to us with little reminders like that?

You look right at home in those places. (Janet didn't want a close-up?)

Every so often, we all need to got back to our earlier histories.

Glad you had such a great vacation.

What a fantastic story. Although I didn't stick with journalism at the university level, I do fondly recall those crazy nights of newspaper editing. The closest friends I have from high school are the one that worked on that newspaper with me. (I never realized that until I read your piece here.) And I recall driving through town like my hair was on fire so I could meet the greyhound bus that would take our paste-ups to the printer in another town.

Thanks for this journey!

when i read
"some student journalist might walk in and find it"
that gave me chills for some reason.

very enjoyable post.
you two are a sweet couple.

i once had a job at tektronix doing nothing but taking typeset, cutting it apart and doing layout and paste-up for page after page of the product manuals.

no wonder my brain is off kilter.

you lead us right to the edge of the story and leave us wanting more ...

So cool to get to know you a leeetle bit more. thanks.