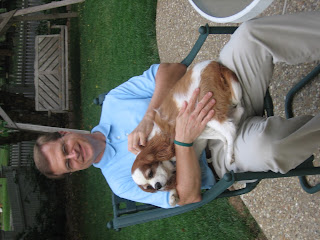 The time is approaching. It will be sooner rather than later. And eventually I will have to decide.

It’s about the dog.

He’s 14+ years old. He arrived in our family when he was about three months old and my youngest was in third grade. Son and I had driven one Friday afternoon from St. Louis to eastern Kansas, spent the night in Lawrence, and then drove the next morning to Emmett, Kansas. The breeder lived on a farm (down a long dirt road from the highway and then over a log bridge), had nine children and raised two kinds of dogs – Papillons (or Toy Spaniels) and Cavalier King Charles Spaniels. We were there for a Cavalier.

He’s been part of the family ever since. Thoeretically he was supposed to be my son’s dog, but parents know how that goes. Actually, my wife and I took the most care of him.

And now he’s 14+. The vet rather cheerfully tells me he has the heart of a five-year-old dog, unusual in a breed prone to heart trouble. But he’s mostly blind (cataracts), mostly deaf, arthritic and with a tendency to have his back legs collapse from underneath him. He gets a pill for anxiety; he has “accidents” if he can’t see either my wife or me in the house. He spends most of his time now in his crate, sleeping.

His little face is almost pure white. At the kennel, they call him the old man.

The youngest, formerly that third grader who’s now graduated from college and working, came in from Kansas City last weekend. He knew it was likely the last time to see the dog. That’s why he came.

So, it’s now time for a decision.

And I don’t want to make it.

I’ve called the vet, and I’m waiting for the return call. My question is: how do I know when it’s time? What do I look for? Do I wait until the infirmities are overwhelming or do I do something sooner? The dog is still getting around, but each day is a little harder.

No, this is not the worst decision I’ve ever faced. But it feels something like that.

And I’m making it the usual way – by trying to avoid making it.

I will eventually do what’s best for the dog, and I already know what that is. But there may still be a few weeks yet.

But not much longer than that.


Over at Faith Barista, Bonnie Gray had been hosting a jam on a number of topics related to faith. Last week, the topic was “Can Faith Change Your Personality?” This week, the topic is “making tough decisions.”

Photograph: Me and Cody, about three years ago, by Janet Young. Used with permission.
Posted by Glynn at 5:00 AM

That's tough. I remember my bulldog that we had to do the same thing.

I will always remember how he would "leave presents" for me when I would return to my room from school or work. Always in my room. But he is a great dog and this will be tough. At least Cameron has had the chance to pet him. Wish I had that picture.

That is indeed tough. I have met many, many dogs over the years on my route. These tough decisions are made and I try to stop and listen to the owners stories about a beloved pet. Prayers Glynn.

My heart is with you.

Never a easy decision...praying for you.

Glenn
In Texas I told you i had to put my dog down.

yesterday, I took his mat out to the curb for the trashman.

Glynn, we're in the exact same position, except that our dog is about to turn 15. The vet says she's fine, but she is also blind, deaf, arthritic and incontinent. She sleeps all day in my son's closet because she likes it there. The decision would be easier if she had a disease and wasn't just old. All I know is that she still seems happy--she's always wagging that mutt tail of hers.

My heart has walked through this and there is no easy answer ... and I still miss him.

The pain of this post reminds me of Ann K's post over at THC today. It's different, but it's the same too.

These decisions about life and death that seem to be ours and yet, and yet...

(So sorry for you, btw. These are hard moments.)

(Aside: I just tagged this post... and when making a decision of how to tag it, I chose "Family")

Oh, Glynn. So sorry. It's a heart-wrenching decision and I know you will have peace about it when the time comes. Still so difficult.

Out companion animals teach us so much, especially about the grace attending letting go.

Glynn, we had the same question with our Lucky who was 14 and had the same ailments plus a cancerous tumor. Any normal person would have "put him down" with this diagnosis but not us. The vet kept saying "you will know when it's time." Six months after he was expected to die & after creating our own doggie hospice for him, we woke one Monday morning, looked at each other, and said "it is time." He died in my arms in the most peaceful way. I looked into his clouded cataracted eyes & they immediately cleared as he told me "thank you." We brought him home to his final bed by the pond he loved so much. You will know when, Glynn. He will tell you. I grieve your impending loss but rejoice at the years you had with each other. "Don't cry because its over; smile because it happened." (Dr. Seuss) But I still cry. Like now. God's peace to you, friend.

I am so sorry, Glynn.

The dog of my childhood was Shep. There will never be another dog quite like him - independent and lovingly loyal. We watched him age with sadness - slowing down until my Dad had to carry him up the steps.
The year I went to college, he just walked away one day and never came back home (my Dad couldn't find him anywhere). I still hold Shep in a special place in my heart.
I understand Glynn.

Ours was 16 when the time came. His quality of life kept dropping. Friends said, "You'll know when the time is right." One morning I tried to wake him and he had something I can only describe as a seizure before finally coming awake and walking slowly to his bowl.

I held him at the vet with his snout in my hands while his head grew heavy. He was a great dog, and his death still moves me to tears. Sounds like you guys gave your dog a great life.

Glynn, I'm also thinking of Maureen and her Seamus.
Praying for you and Janet. Part of the family, this precious one.

So sad, Glynn. Praying for you as you make this tough decision.

That is a tough decision. Our dog, Sheena, began to loose her mind. She was in pain we think because of how gingerly she walked around. We knew we had to make that tough decision. It was harder for me than for my husband who took her in as an abused dog many years ago. I grew so attached very quickly.

Oh, Glynn. My heart is breaking for you.

You wrote: "How do I know when it’s time?" That gave me chills because I wrote a post about our decision last May--When Do You Say Goodbye?

And now I sit here with my 17-year-old kitty, force feeding and force watering and giving medicine and waiting for a biopsy report.

It's so raw. I know what you're feeling.

That's such a happy picture of the two of you. Then, I read. So difficult.

"No, this is not the worst decision I’ve ever faced. But it feels something like that. "

Glynn, making a decision for someone you love is never easy. Like you say, we don't want to make it unless we have to. So sorry you have to go through this. Will be thinking of you.

This is not an easy road to travel. I've been this way before. I'm sorry. And I'm praying...

you grow stronger after all of these.
thanks for sharing!

you grow stronger after all of these.
thanks for sharing!

There seems no end
To this spinning
And no beginning as I fall
Just these constant
Turnings and windings
Of the ball.

I'm so sorry you're at this crossroads reluctantly facing the decision you didn't anticipate 14 years ago. My similar story involved a poodle that thought he was a big dog. My parents became his people as I moved to college and Africa. When I'm really down, I think of how I didn't get to say good-bye and my parents had the horrid responsibility of making the tough choice without me. May you know the right thing to do at the right time. May your heart overflow with infinite memories of a canine companion who, I'm sure, loved perfectly.