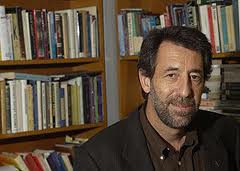 At the High Callings Blogs staff meeting at Laity Lodge last week, we joined the writer’s retreat conference on Thursday evening. On Friday, the workshops started, including ones for fiction, spiritual writing, non-fiction, song writing and others.

I had signed up for the poetry workshop, led by Scott Cairns, a poet and professor at the University of Missouri – Columbia. (Yes, I see a certain irony in traveling to the Hill Country of south Texas for a workshop led by a man who lives an hour and a half from my house in St. Louis.)

At the workshop, 12 of us gathered in a circle, and Scott began the discussion by asking what, exactly is a poem? How can poetry apply to scripture? Could we learn something from how the Jewish commentators explicated their scriptures? He read a prose poem by Jorge Luis Borges entitled “Legend,” about Cain and Abel meeting long after the great drama (and Abel’s murder) in the Book of Genesis. This is what I wrote as I listened to the poem and the discussion:

I was listening to a poem
by Borges and wondered,
did the mark upon Abel
become the mirror that
became the mark
upon Cain?

Scott had so many good things to say. I don’t think I’ve known a more gracious workshop leader, and as this was my first poetry workshop, I had a lot of questions about what might happen. Among several other things, he said, “To understand tradition, you have to be humble. Arrogance has no understanding of tradition.” And this: “Let the mind descend to the heart to hear the text in a different way.”

I felt completely at home in the discussion, until he rather innocently asked each of us to name a passage in scripture that we found to be a “dark saying” or particularly difficult. Most of us could think of at least one.

And then he said, “Now, your assignment is to write a poem about it and read it to the rest of us tomorrow for comment and critique.”

I had posted poems online before – and they are always the postings I’m the most nervous and sensitive about. But I had never read a poem I wrote aloud to a group. Not to mention doing so with the expectation of comment and critique.

Photograph of Scott Cairns by University of Missouri.
Posted by Glynn at 12:25 PM

What a wonderful opportunity you had.

I absolutely love "Let the mind descend to the heart to hear the text in a different way".

I look forward with delight to reading the poem you wrote for the workshop.

I was floored when he said, "Arrogance has no understanding of tradition." Sadly, I've been arrogant many many times in my life, but I'm trying to become less so.

Scott could not have been a better fit for Laity Lodge.

I love this sneak peek into your workshop, Glynn. I went back and forth in my choice. I wish I could have attended them all. It sounds like this was a good one.

I, too, look forward to what you wrote should you choose to share it with us.

Interesting, very interesting. Sounds like quite a thing. Such classes definitely sound like a good bit of experience to have, though with my schedule nowadays...the horror. Nonetheless, sounds like a good time.

Nice little poem you've made in the meanwhile.

Hope the reading and critique go well for you--I'm sure they shall!

Glynn - Thanks for sharing. Your humble honest heart shines through.

I would love to have you all in my closet frankly to help me raise these young poems I keep writing....they need direction, Glynn. :) Good to meet and make prose with you!