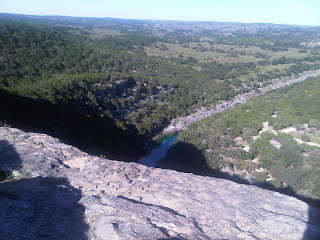 After Scott Cairns had given us our assignment at the Laity Lodge writers retreat – a poem based on a “dark saying” or difficult passage of scripture – I went back to my room at Song Bluff House to write. I wrote four drafts and decided I was done. And then off I went for a walk and trail hike, and rejoined my virtual-now-real colleagues with the High Calling Blogs for dinner and an after-dinner program.

The next morning, I woke up shortly before 5 a.m. I was wide awake with the sudden realization that what I had written was all wrong. I sat there on the side my bed and wrote two more drafts, continuing to work it, a word here and a phrase there, tried a new framework, and finally told myself I needed coffee. After walking down to lodge and finding the coffee, I sat in the empty, quiet Great Hall and wrote three more drafts. After breakfast and devotions, it was time for the workshop.

I had posted poems on this blog before, and those posts have always been the ones I am most sensitive about (this one is, too, because the poem is below). I think there’s something about me and poetry that involves a certain vulnerability.

After a short discussion, we started. I didn’t go first. I didn’t even consider going first, or even third. Part of me hoped we’d run out of time before I had to read mine, and part of me wanted badly to do this.

Each of us read our poems. Each reading was followed by a discussion and commentary. And something rather remarkable happened.

As each poem was read, a kind of silence descended upon us. We were all listening, and listening closely. With each reading, something was building. It was as if we were in church, listening to scriptural and liturgical readings. It was more than moving. It was often overwhelming.

We didn’t run out of time, and it was time for me to read my poem. The passage I had selected was Joshua, chapters 5-12, when the Israelites are invading the Promised Land and are instructed to destroy all men, women and children, and even the farm animals in some cases. Total eradication of all human life.

This is the poem I read:

Would I have been cleansed
in the wilderness, or buried
in the sand as a submission
to the cleansing?

That man wielding the
great sword, that man
commanding the Lord’s host,
that man who makes ground
holy,
would I have obeyed, even
unto death?

Could I have stood in that
Jericho doorway, and plunged
the sword into the mother
and then the child? Or the child
first and then the mother?
And plunged that sword again
at Ai and Makeddeh,
Libnah and Lachish,
Eglon and Hebron,
Hazor and Anab, Jarmuth and
Gexer and Bethel and Aphek
and Tirzah and Megiddo and…

When the man who makes
ground holy turned over
the tables of shekels and
talents and doves, shouting
at thieves and robbers,
would I have conspired
to kill him, becoming yet
another submission to the
cleansing?
Or would he have
cleansed me?

(Last draft composed 10/3/10 in the Great Room at Laity Lodge, prior to the start of morning devotions.)

When I finished reading, and finally looked up, there was the familiar silence. Scott Cairns was staring at me. No one spoke, and for a moment I thought I'd produced a real turkey. And then he and the others began to speak, rather softly. People were kind.

“You have two poems there,” Scott said. “And that’s great. It’s a good day when you can write one poem. Two poems is a great day. And they should be published on facing pages in your collection of poems.”

I don’t think the poem is finished yet (or is that poems?). But it stands in a line of events last week that started with a devotion on Thursday by Gordon Atkinson and continued through another devotion by Gordon and communion on Sunday. In fact, the words Gordon spoke both times are the bookends for this poem.

Photograph: View from atop Circuit Bluff, Laity Lodge; courtesy of my cell phone. I think of it as looking out toward a kind of Promised Land.
Posted by Glynn at 5:00 AM

(I am afraid to break the silence)

It is two, but it is one too. I can sense the change in you.

Is it all right for me to say that I giggled at the boyish sense of trepidation here? And that I thought as I read your poem "what was he thinking putting all those Biblical place names in there to read out loud?" Because I hate taking those on. That would make me nervous too.

I am sorry; I suspect I am not so reverent as I should be, but I am awed at the depth of what transpired in you.

Thank you for giving you here.

Glynn, it's nice to read the poem now after having heard it in our workshop time. I'm struck again by the power of that list of names, and how the conjunction with ellipsis, "and..." communicates the breadth of destruction, which was obedience. A stunning thought to be left with. It's almost as if each name is another thrust of the sword.

Thanks for posting this here. And best of luck on the revisions.

I want to hear more from Scott about why this is two poems. I understand there is a strong turn, but I don't understand why the turn necessarily breaks the poem in half.

I will say this: the first section is haunting. It forces me to face the worst things, the scariest things about my faith and my God, and it doesn't provide any easy answers.

It will be fascinating to read again any revisions you might make to this poem. Quite extraordinary what you've achieved already.

Obedience to God, obedience to one's own sense of right and wrong as derived from God -- or others' laws? The cleansing of the soul in the Desert, in that place where truth is found, or in the church man makes? Whose sword taken up? What is the more powerful act: taking up the sword or never lifting it in the first place? These and so many other questions revealed in a poem that could be discussed for hours, I imagine.

I see two stories here, the narrative of what happened (the Biblical story) and the story as yet not fully realized by the one still questioning.

Now I really wish I had been at that retreat.

He knows our hearts, doesn't He? And continues to love.

I admire your openness and honesty.
Thank you for sharing your touching experience, allowing us to grow and change too

Glynn, Wow Glynn. You really tapped in on this one. God bless you my friend.

The Old and the New testaments woven together; name after name, plunge after plunge of the sword, until the sWord became flesh and turned it all over - turned it upside right and the last sword pierced His side and blood and water flowed.

Hmmm. I experienced it as one poem (and I'm pretty fussy about that kind of stuff), though I suppose I understand Scott's critique. But I don't think it matters. It can also be (and it IS) just one poem.

Wow, Glynn. I'm on the side of it being one poem, because I love having Jesus juxtaposed alongside one of the more disturbing parts of the Old Testament.
It sounds like Scott Cairns was continuing a tradition started in the Great Hall by Madeleine L'Engle: take a passage of Scripture that you hate, and redeem it, without changing the integrity of the Biblical text.

Yes. Something has changed.

I think it's there, in the poem.
The thing (the One?) that turns the poem has changed you, too.

I think it's that change of scene--from the wilderness to the table-turning in the temple--that gives it that feel of two. But, it could just be two different chapters on this same theme. But what do I know? It's very powerful, Glynn. So fascinated by the way this time has rubbed off on your work.

in the silence
a thousand voices
wait


i like reading the poem
and i think it would also
be nice to hear you read it.