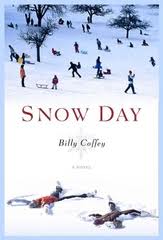 Peter Boyd wakes up and sees a heavy snow falling outside. He decides to call in to the factory with a snow day, and he looks forward to not thinking about impending layoffs. His wife Abby sends him out into the snow to the store for bread and milk. And Peter walks right into life.
Author Billy Coffey has a singular ability to tell a story “true,” and in Snow Day, his first novel, he not only tells his story true, he tells stories within the story just as true. And he tells them well: how scars and a limp can be beautiful; how winning a lottery ticket can be both tragic and redemptive; why one can lose his faith in the face of overwhelming human devastation; and what one can learn from one’s children.

If you read Coffey’s blog, you will know more about Snow Day than you realize. Yes, this is a novel, but it is also Billy Coffey’s life, and it is that life he tells so well from that small town in the mountains in Virginia. He draws the universal from the particular, often in a surprising, unexpected way. And we know these characters in the novel because we know people just like them, and because we are people just like them. He creates them all with fine detail, so that we can hear the elderly man calling for help in the big box “Super Mart” and see the disbelief followed by joy on the face of a six-year-old who finds the best Christmas present ever.

Coffey writes with a vulnerability and openness that’s humbling both to himself and the reader. There’s a sweet tenderness about his characters – even the unlovable ones – and his story.

So so true. "Snow Day is a quiet story, a humbling story, a story about people we know and ultimately a story about ourselves." And I suppose that's why it hits home - because it is.

I don't read much fiction, but I am looking forward to picking this up.

I'm with Michael, not much on fiction but looking forward to this. Thanks for the review!

Just bought my copy on Amazon!

And for once, I actually HAVE a book you have reviewed! I got it on Friday. I can't wait to read!

You have captured the essence of this book so beautifully:

Great review, Glynn. I hope we all get a chance one day to meet Billy. I'm hoping he'll come up my way and do a reading.

I read about 2 - 3 novels a week, but I am savoring "Snow Day" and trying to limit myself to a chapter a day - by FAR the best book I've read all year! Great job, Mr. Coffey!

Thanks so much for this, Glynn. Your words humble me.