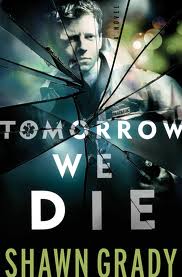 A dying man hands paramedic Jonathan Trestle a piece of paper with seemingly nonsense scribbles, saying “Give this to Martin.” But the man doesn’t die and discharges himself from the hospital. When Trestle tires to return the paper, he finds the man dead, this time permanently.
Then the man named Martin dies – and his body disappears from the morgue. And then Trestle realizes what the scribbles are all about, and finds himself under arrest and on the run.

Shawn Grady, author of the previously published novel Through the Fire, has written another wild suspense ride through the streets of Reno with Tomorrow We Die. But there are three aspects of his second novel that make it every bit as good as the first one – and even a shade better.

First, Grady draws upon his own experience as a paramedic, to render the action and details of the story vividly real. Instructions at response scenes are barked and received in language that only a paramedic would know and understand, and yet the reader is able to follow closely.

Second, he develops Through the Fire as both a suspense story and a love story. Trestle connects with Naomi, a nurse serving on an emergency medical helicopter and a former girlfriend he walked away from. The romance is rekindled and becomes part of the suspense story.

Third, Grady draws the character of Trestle in complex ways that make him more than only a character is a suspense story. He was to live and deal with an alcoholic father, deal with his own feelings about the death of his mother, find his way back to Naomi, and protect his acceptance into medical school, not to mention deal with several villains and attempts on his life. In the process, Trestle becomes a very three-dimensional and very real character.

Grady’s writing, already solid in his first novel, is even better in Through the Fire. And he tells a first-rate suspense story, too.
Posted by Glynn at 5:00 AM

Email ThisBlogThis!Share to TwitterShare to FacebookShare to Pinterest
Labels: Shawn Grady, Through the Fire, Tomorrow We Die

Oh boy! I'm going to look for through the Fire at the airport bookshop tonight! sounds like great beach reading.