Author Travis Thrasher is today associated with well written suspense novels like Isolation and Ghostwriter, including Solitary, the first book in his new Young Adult series. (He’s also got three other writing projects underway for publication in 2011 – the guy not only writes well but he writes well and prolifically.)
Interestingly enough, Thrasher started his writing career with two collections of love stories.

Because I like his novels, and because I usually like to read everything by an author I like, I was able to get my hands on both collections (one was easy; the other was not and took quite some time before an Amazon affiliate got hold of it). The first is The Promise Remains/The Watermark: A Collection of Love Stories (2001) and the second is Three Roads Home: Stories of First Love & Second Chances (2003).

The Promise Remains/The Watermark is two novellas. In The Promise Remains, a young couple who fall in love during a summer camp find their way back to each other (and just in time to avert one’s pending marriage). The Watermark is a more contemporary interpretation of the story of the prodigal son, in which a young man from a wealthy family experiences years of guilt for the responsibility he bears for the death of a young woman because he was DWI. 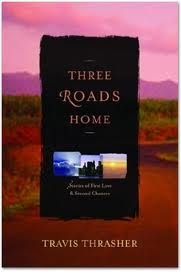 Three Roads Home is a collection of three novellas, and they continue the themes of first loves and second chances found in the earlier volume. In Somebody, a young married couple have an argument about the wife’s suspected infidelity just as the husband is going out the door to catch a plane to Germany; the plane crashes in the Atlantic. In In Care Of, a successful author with a family he loves receives an email from his first love, and then faces the possibility of meeting her. In Still Life at Sunset, a young woman returns home to make peace with her past, and discovers an old love.
I like these stories. Thrasher early on was demonstrating his ability as a storyteller. But I discovered something else. These love stories foreshadow a number of the later suspense novels to come.

That shouldn’t have surprised me. A love story, after all, has elements of suspense, even considering the suspense is about “will they get together” as opposed to “will they get killed.”

But there are also specific stories lines and plot developments in the love stories that will see a different kind of treatment later on. The geography of The Promise Remains, for example, is very much like the geography of Solitary and plays much the same role. There is a Mexico parasailing event in Still Life at Sunset that will become a major element of the novel Sky Blue (and one of my Thrasher favorites). And then there are the surprise twists and plot developments that are used so well in both the love stories and the later suspense novels.

The love stories all stand on their own, as do the later suspense novels. But they’re of a piece, and it’s interesting to identify and understand the connections. But whether you read his love stories or his suspense novels, you're in for some good reading.
Posted by Glynn at 5:00 AM

Glynn -- between and you Maureen my reading list grows every longer!

i have enough books to read...right now. though, i am patiently waiting for one that may be written by a very good freind.

I wonder if the later novels are suitable for a 12 year old who is an avid reader ...

Always a pleasure to read a book review...