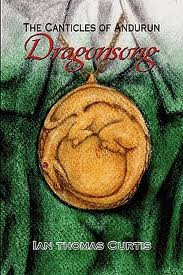 I’m too old for this. My reading habits have generally been set for a long time, a nice comfortable rut, and along come an author or two to upset my carefully tended reading cart.

First it was C.S. Lakin, with her The Wolf of Tebron and The Map Across Time, the first two books in her "Gates of Heaven" series. Then along comes Ian Thomas Curtis, with The Canticles of Andurun: Dragonsong.

I keep telling myself I don’t read fantasy.

Except now I do.

Dragonsong, the first in a planned series, tells the story of a teenager, Justias Eventine, who lives in a world controlled by dragons and administered through “clerics,” zealots and magistrates. Clerics and zealots are more like soldiers than religious authorities. One of their jobs is the tithe and branding – collecting the 10 percent annual payment from all people living within the areas controlled by the dragons and applying the dragon “branding” to the young when they come of age.

Justias is determined not to be branded. And then a simple thing – helping an injured man found in the forest – becomes the catalyst that will take a young man, more a boy, and gradually transform him into not only a dragon slayer, but the dragon slayer, the one foretold who would come. For the injured man is a cleric who has rebelled against the order, and the order knows he must be destroyed – along with anyone standing in the way. All of Justias’ fellow villagers are killed; his father taken prisoner; and Justias deemed an outlaw. Pursued, Justias flees to his uncle, and then travels to the south, to the relative safety of the last remnants of the noble houses still not dominated by the dragons. On that journey, Justias comes to understand that he is – and must become – a dragon slayer.

This is the world called Kallanedaros, and what a world it is, full of humans living in thralldom and populated with dragons, shapeshifters, ogres, sea monsters called zuls, goblins, elves, dwarves and any manner of wild creatures (and the spiders; I can’t forget the spiders). The story Curtis tells is a large story, an ambitious story, and he keeps it perfectly under control, leading the reader through a journey and ultimately a quest that are simultaneously magical and real. And it’s so real that the reader joins Justias and his friends as they make their way through intrigue, betrayal, danger and horror, to accomplish the task that’s been set out before them.

The imagination that created this story and this world is amazing, matched only by the detail that’s used to make this world so real. I repeatedly forgot that I was reading a fantasy novel, coming to understand and enjoying this book for the epic story it is. Curtis is one fine storyteller.

It would be easy to say this is “like” other works of fantasy. It is – there are certainly influences from Tolkien, Lewis and Robert Silverberg (and I caught the fleeting reference to Frank Herbert’s Dune) – but it is also a wonderful work in its own right, standing by itself, a remarkable story of a young man who will change his world.

There are other stories to come in this series. The tyrant dragon, Gildaryss, is still waiting and conniving in her mountain lair. And I can’t wait to read what comes next.

The web page for The Canticles of Andurun: Dragonsong (along with some cool artwork)
Posted by Glynn at 5:00 AM

The book sounds great! And I'm glad you're discovering the pleasures of fantasy fiction. Some of the best writing is going on in this field. And of course good writing is good writing, no matter the genre.

You are making it really difficult for me Glynn. First, it was Sam Batterman's Wayback. (I am having no help in getting Maximum Reserve). next I will have to check out Lakins' books. now you tell me about this one. When am I supposed to get any studying done? LOL If you get a chance check out The Sword by Brian Litfin. I reviewed it here:
http://billgrandi.ovcf.org/wordpress/?p=4437 Reckon i will be making a trip to my local library.