My Moment of Sports Glory 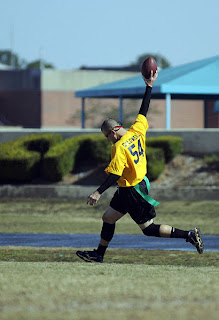 I have never been athletically inclined. I don’t mind watching some sports: football, for example. But not golf. I’m one of three people in my company who don’t play golf. The other 21,000+ are golf fanatics.

Growing up, and playing sandlot baseball or street football, I was usually one of the kids picked last. I expected to be picked last; all the other kids were better than I was. I was grateful to be picked at all. Even last.

It was my senior year in high school when I achieved my moment (note I said moment, not moments) of sports glory. Volleyball was no longer allowed, for some reason I don’t recall. But we were all herded onto a large football field to play touch football. More than 100 boys (it was an all-boys high school) faced off to play touch football – 50 on a team. The coaches thought it would be funny.

Laughter – and ridicule – can have one of two effects. You cave in, or you get mad.

And I took off running.

What no one expected – possibly including me – was that I was fast.

I raced for the goal line.

No one expected me to run as fast as I did. Including me. But I kept focused on the goal line. And ran like the wind.

The laughter from the other team turned to shouting, and then screaming (yes, it was just a P.E. class, but you know boys and competitive stuff – every game is played like the Super Bowl).

I ignored the screams and kept running. I dodged opposing players. I bobbed and weaved. I sidestepped. And kept running. My own team had been left far behind. My guess is they stopped and simply watched. They sure didn’t help.

The roar went up from my team. Who cares if it was the sports nerd who scored? We scored! We scored!

On our next possession, the kickoff once again landed in my arms. And I took off for the goal line.

This time, both teams were better prepared. My own team protected me, and the opposing team swarmed around me. I didn’t make it all the way to the goal line. My flag was pulled.

Ten feet from the goal line. We scored on the next play.


This post is submitted to the One Word Blog Carnival hosted by Peter Pollock. To see more posts on the word “goals,” please visit the site.

Photograph: No, that's not me and my touchdown. But it felt like that. Photo courtesy of the U.S. Navy.
Posted by Glynn at 6:55 AM

Yay, Glynn! This post made me smile this morning. Thanks.

I would've picked ya or at least traded for you mid game! Great story Bro'

Have to agree with Katdish this morning Glyn. You maketh me smile. :)

Sometimes our greatest strengths show up when we are "picked last."

This made me smile too. A beautiful story, Glynn. I like stories of goals that turn things upside down. Glad your team won that day. :-)

Congrats! I love this post. I'm not good at sports at all- you're a hero. Focus on the goal, it's so important. My husband has that on a poster somewhere.

Sweet! Thanks for sharing. The post reminded me of Philippians 3. Let's keep focusing on the goal! Blessings!

These are the moments you never forget.

you have displayed many wonderful surprises.
and i have no doubt that this run will continue.

What a great story, Glynn. Inspiring, not only because you focused on the goal and made it, but in doing so, you pulled everyone with you into a higher level of soul and consciousness. You lifted the day, not just the ball. Anger propelled you, and you ran with it.

Using our emotions as fuel for sport, art, or new understanding is transformation at its best. No longer a nerd, you became a winner. In the writing of this winning piece, you've just gone and done it again! Lovely work.

Focus definitely has a way of motivating us.

nice bit of wisdom you shared in that story...i love it when we surprise even ourselves like that too..

What a great story and an amazing truth. If the ball comes to you - - run like "Heck."
I believe we must also do this in the game of life, if God gives you an opportunity, focus and head for the goal. If you need a second try, get your team to rally!

In my secret imaginary world of blogger teams, I'd pick you first for sure.

SOOOOO great. Yeah!!!!
I love these moments of triumph.