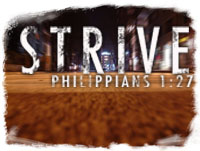 Chaucer hears it emerging
from the French or Germanic or both,
recognizing a common root,
the Latin perhaps, it has
a Roman flavor to it.

Shakespeare writes it
into the literary canon
as the committee of King James
codifies it into the Biblical canon,
at least for a few hundred years.

It’s disappearing with our bare notice,
a rather quant word, an oddity really,
losing its being in the diversity,
the diffusion of contemporary
meaning and definition.

The most important thing,
the critical and vital thing,
about the verb is not the verb
but the adverb attached by Paul:
together.

This poem is submitted for the Warrior Poet circle, hosted by Jason Stasyszen at Connecting to Impact. This week’s prompt is “striving.”

The word “strive” emerged in its recognizable form (“striven”) in the Middle English period, between 1175 and 1225, related to similar words in French (“estrivber”) and Germanic (“streben”).

I became rather fascinated with this when I looked in Young’s Concordance and found 42 references to strive and striving (in the King James version of the Bible) but only eight when I checked the concordance to the New International Version of the Bible. The NIV replaces “strive” with words like struggle, compete and contend.

Around such musings a poem happens.

One of the definitions in the Oxford American Dictionary is "to carry on a conflict". What a contrast that is to the meaning in your final stanza.

Aaah the trails words take us down. This was a good trail to follow. Nice wrap.

strive together with me
in your prayers to God for me

strive together in prayers...

"Life is like riding a bike, in order to keep your balance you gotta keep moving!"
this was so beautiful and peaceful and made me happy for you.
Wedding Dresses
This site is a can refer to the choice of browser may help you see

You never cease to encourage and enlighten me, Glynn! Thank you so much.

I love both the beautiful and the academic side of this. Wow. Great stuff Glynn, as always.