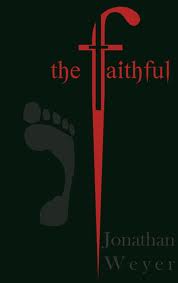 The Rev. Aidan Schaeffer is a young assistant pastor who has lost his parents in a fire, lost his fiancée to another guy, and is now losing his faith. It doesn’t seem things can get any worse, particularly since his knows his crisis in faith is going to lead him to unemployment.
But things do get worse. Much worse. His former fiancée is murdered in what looks like some kind of cult sacrifice. He becomes a suspect. And then footprints begin appearing in the snow, seemingly all by themselves. And Aidan hears voices. Soon he will have to deal with ghosts, demons and "bone conjurors."

Aidan Schaeffer’s crisis in faith is being introduced to a supernatural horror, and without faith, he doesn’t stand a chance.

The Faithful is Jonathan Weyer’s first novel, a solid entry in the category of Christian supernatural horror, and it’s a fast-paced, captivating and ultimately satisfying work.

The story functions on several levels. There is the murder investigation. There is the crisis of faith and what it means for Aidan’s work, combined with church politics. And then there is a romantic story, as Aidan finds himself attracted to one of the investigating detectives. The novel works well on all three levels.

Weyer, himself a Presbyterian minister (in my own small, conservative Presbyterian denomination, in fact, but there's no personal connection), knows his way around church staffs and elders boards, and the details ring true. He also is well versed in all of the “new atheist” claims as well as the philosophical and even theological territory staked out by science. His main character has to confront his own inconsistencies and faulty reasoning just when his faith needs to be its strongest – and there’s a lesson here, too, about dependence upon God.

“The Faithful” is scary and riveting. Weyer tells a good story, one that may be more familiar and more real than we realize.
Posted by Glynn at 5:00 AM

Way to go Glynn! You're killing me here! :) Although I am somewhat "saved" in that this is not a genre that I particularly enjoy reading. I am not a Ted Dekker fan. I know someone who is so will direct them this way.

This sort of reminds me of Frank Peretti's works, especially This Present Darkness and Piercing the Darkness.

What a great blog! Just found it and am following now. This sounds like a good book. My husband and I will have to check it out.

Forgot to mention, here's my blog if you're interested. Writings from my daily quiet times. Hope Faith & Life. I'm always happy to find other Christian writers out there. Thanks again!

As we know faith is always tested...no matter our calling in life...standing close with our Creator is a daily project and promise....blessings..bkm