Things I See on My Bike Rides

I have a couple of regular biking routes from my house in suburban St. Louis. One is Grant’s Trail, about a 20-mile round trip that takes me alongside Grant’s Farm (the Clydesdales!) and the Ulysses Grant home White Haven. The second is a longer ride – about 24 miles roundtrip – that goes almost due east and cuts across the suburbs of Glendale, Webster Groves and Shrewsbury until it reaches the city of St. Louis. I follow the River Des Peres Trail, connecting to the Christy Greenway, and then a bike lane that takes me almost to Broadway, paralleling the Mississippi River.

As I cross Interstate 55, I enter a section of the city known as Carondelet, one of the oldest parts of St. Louis. More than 150 years ago, German immigrants started settling in this area, which was already populated by small farms from French and early American settlers. The architecture in this area is generally red brick, Victorian, and middle and working class.

Every time I bike down Michigan Street in Carondelet, I pass this where Michigan intersects with Iron Street: 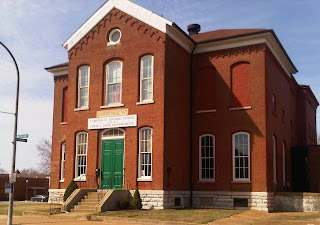 This is the old Des Peres School, built in 1873. It’s now the home of the Carondelet Historic Association, but it’s famous for something else. It was the site where a woman named Susan Blow went to work as a teacher, and opened the first successful kindergarten in the United States, also in 1873 when the school opened. 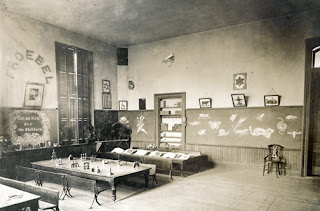 She was born in Carondelet in 1842 was sent to New Orleans for her education, and apparently fell in love with a man her family deemed unsuitable. She wasn’t allowed to marry him, and they found a replacement, which she turned down. President Grant appointed her father minister to Brazil in 1869, and she went with his as his secretary. She never married. She died in New York City in 1916.

You can read more about her at Wikipedia.

The top photograph was taken with my trusty smart phone; the bottom photograph is of Blow's actual kindergarten classroom at Des Peres School, courtesy University of Missouri-St. Louis.
Posted by Glynn at 5:46 AM

Thanks for sharing this. I've never been to St. Louis and really enjoyed the history. Clydesdales are beautiful horses. :) We saw some in Southern California.

Your smart phone takes a very clear picture! I admire a woman who didn't marry just to be married. Sorry she didn't get to marry the love of her life. I admire you for biking so much!

This was an enjoyable trip along your bike route -- and fascinating too. I'll have to go check out Ms Blow's story at Wiki -- I'm so grateful you've brought some of the history lining the streets upon which you ride here!

Glyn: this showed up on my google reader several days ago but wouldn't allow a connection. Is that why this was a re-post? Anyway, great pictures. There are no trails where I live...only hill after hill. I love the challenge but sometimes long for an easy ride along some historic scenery. Thanks for taking the time to share these and the history with us.

We have a very old school here that is now an arts center. It's been very well re-purposed.

Biking is really good for the soul. I prefer the bike paths but have also road on highway. There are so many attractions that people have no idea are there. I vote no more cars!
Thanks for the insight!