A year of blessing 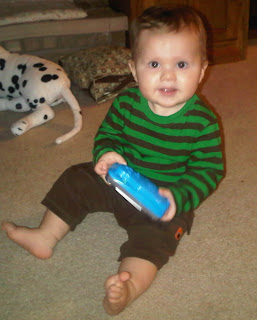 My grandson is one year old today.

A year ago, we faced the prospect of Cameron’s father, my firstborn, dealing with brain surgery while my daughter-in-law was in labor. My son is telling that story on his blog; you can find all the details there, with his account of what happened on March 9, March 10 and March 11, 2010.

It’s still very difficult for me to talk about. Even writing about it makes me veer toward losing it. My son has no memory whatsoever of a 12-hour period. But I do.

So here is Cameron Andrew Young, one year old, threatening to walk at any moment.

We call him the little happy baby. The happy little guy. The laid-back baby (well, he's laid back compared to his father and uncle). He has a sweetness about him that totally beguiles his grandparents and has his grandfather in the palm of his hand. Last year, my son and daughter-in-law took him on the grand tour of Louisiana, to meet all the relatives in New Orleans and Shreveport, and Cameron conquered there, too. 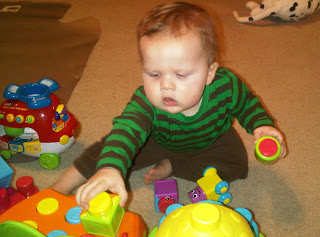 So many things about him totally delight me, but few as much as watching him when my wife walks in the room and his face breaks into this huge smile.

He’s a lot of work. All babies are a lot of work. He spent four days with us in January while his parents went off to San Francisco, and we were forcibly introduced to just how much work babies are, even ones as sweet as this one. (The weather was also bad, so it was four days inside.)

But what a blessing this child is.

I knew I was likely to be totally enthralled, but the reality has been something else again. I have to practice patience and forbearance, and do it consciously. I would babysit at the drop of a hat. I’d drive my son and daughter-in-law crazy if I showed up at their house every time I wanted to. 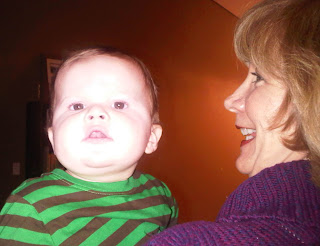 We saw him last night, to celebrate an early birthday for him and us. The big party is on Saturday (when I have to share him with everyone else.)

I think back to one year ago, and I know how good God is.

Photographs: Cameron Young, by Cameron Young's grandfather. The bottom photograph is of Cameron and his paternal grandmother, who usually doesn't like posing for pictures but one can get away with it when she's holding her grandson.
Posted by Glynn at 5:00 AM

Oh, so much work! But when they wrap their little arms around your neck and pat you on the shoulder. Or give you those open-mouth kisses . . .

I'm exhausted after having my grandgirls for almost a whole week. You are right about learning that patience thing.

Oooh! My favourite kind of day at your place -- a Cameron Day!

Glynn -- every day is a favourite day here but when I see int he Avatars on my blog list a photo of Cameron -- I can't wait to leap on over and check out what you've shared.

What a wonderful human being you are.

I cannot believe that boy is already one. Internet time flies just as fast as regular time, I guess. :)

Nothing like a little dribbler to make the day better.

Can hardly wait for some of my own!

What a happy day for all ... and what a cute little guy!

Janet probably has THE cutest nose on the planet! :) Oh Glynn, you make me so jealous! Hold him extra long just after his bath when he's all steamy, just for me? :)

Tremendous story. Tremendous anniversary Glyn. May you, Cameron (both) enjoy each other for many years to come. I will read your son's story when I get time. Thanks for posting this.

look at him!
he's a toddler!

have a good celebration with the family :-)

This is so sweet Glynn. I can hardly believe he is a year old already. Oh how quickly the days fly by!
Happy Birthday to you happy little grandson. I am so thankful, with you, that all has turned out so well. God is so very good.