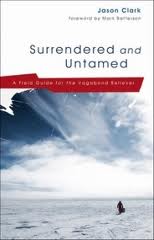 Faith has been described as a journey, a challenge, a life, a lifetime, a pilgrimage, a battle, and a lot more things as well, but I’ve never heard it described quite like Jason Clark describes it in Surrendered and Untamed: A Field Guide for the Vagabond Believer.

Jumping off a cliff.

Death. “Only dead men can experience the resurrection, baby!”

Financial death. You and your family are down to your last $200 – and you give it to someone you don’t know who has an emergency room bill.

Skiing down a suicide slope with the wrong ski on.

Talking to God, and God talking to you. Audibly. And a lot.

It’s faith like I’ve rarely seen it, experienced it, lived it. It is what Clark, a speaker, writer, musician and a lot of other things, too, says we are called to do and to be – that we fully experience God’s character and love and joy.

And Clark is a Canadian. Aren’t Canadians supposed to be calm?

Using a combination of Biblical and personal stories, Clark embarks upon a wild ride, a wild ride called faith. This isn’t John Eldredge and Wild at Heart; far from it. This is a call to be whom we are designed to be, to live our faith as God wants us to live it.

You want to say whoa! Slow down! Get real for a minute. And Clark replies:

Clark proceeds to walk the reader through a process of understanding, and the more you read, the more you understand what he’s saying and doing. He’s telling us that God wants us and desires us to live a good story, the point of which is the end: “The end of the story is the joy of greater intimacy with God. It’s the surrendered and untamed existence that God has called all of us to live.”

This is exhilarating and terrifying stuff.

Exactly! Clark would say, it’s terrifying and exhilarating because that’s what God is, and that’s the life he wants us to live.

Surrendered and Untamed is a crazy book. Crazy good.


To learn more about the book and Jason Clark's ministry, please visit his web site.

Surrendered and Untamed: A Field Guide for the Vagabond Believer, by Jason Clark; foreword by Mark Batterson. Baker Books. $13.99.
Posted by Glynn at 5:00 AM

I have a dreadful feeling that he may be right. And I mean dreadful...

Canadians and calm -- seriously? That's what we are?

This book sounds fabulous -- and one I may just have to read.

This sounds like a wonderful read, Glynn! this is one of my goals in doing my Playdates with God every MOnday--making my faith more of an adventure with Him. It sure has been fun so far.

On the edge with our faith I love it! Except in the first stages of realization... Then you hook up the bungee chord and jump! This does look like a good read, I do feel a little nervous already.

Glynn, I'm so glad you are such a voracious reader, because you keep me up to speed on what's going on out there in the literary land.

I have never heard of this book, or this author, and it sounds a little crazy, yes, maybe too crazy for my taste. Although we could all use a good push off the cliff once in a while, couldn't we? Maybe I'd like it after all. This whole blogging and writing thing has been my terrifying crazy. But I'm still at it. Still jumping off the ledge. Whoa.