A Rose in the Water 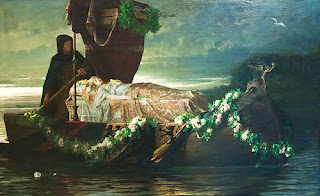 The boatman poles on, oblivious
even to the chilled pale loveliness
before him, oblivious to all
except grief, a grief
more consuming
more profound,
more destructive
with each stroke, each thrust,
each sound pushing into
the shallowness of silence.

A small jarring; the boat
shudders in slight movement,
a barely felt motion of death
as a soul wings free.
A rose falls from its wreath,
its promise of beauty unfulfilled,
its heavenly scent submerged,
its promise of life drowned
by true devotion unreturned.
The boatman poles on, oblivious.

This poem started with a simple glance at a short news brief in the Art Institute of Chicago’s magazine – a regular feature on a work “from the collection.” The painting was created in 1874 by Toby Edward Rosenthal; it depicts the body of Elaine of Astalot being taken to Camelot, as described by Alfred Lord Tennyson in Idylls of the King. She had died of a broken heart, her love for Sir Lancelot unrequited. Something about the work moved me so much that I went searching and found my copy of Idylls on a bookshelf in my basement and read that section of the epic, entitled “Elaine and Lancelot."

Following exhibits in Berlin (the American artist lived in Munich) and Boston, the painting created something of a national frenzy by the time it was displayed in a San Francisco art gallery for 12 days in 1875. More than a thousand a people a day lined up to pay 25 cents to see the painting. According to research by the Art Institute, Elaine clubs sprang up, an Elaine waltz was written and even an Elaine cigar was manufactured and sold. Something about the painting struck some kind of chord in the American psyche. The painting was also shown at the Centennial Exhibition of 1876 in Philadelphia. It was given to the Art Institute of Chicago in 1917 by Mrs. Maurice Rosenfeld, the year that the artist died in Munich.

Inspired by the story of Elaine and Lancelot, the American composer Edward McDowell created this symphonic poem, "Lancelot and Elaine, Op 25" in 1886:

This poem is submitted to One Shot Wednesday sponsored by One Stop Poetry. to see other poems, please visit the site. the links will be live at 4 p.m. Central time today.
Posted by Glynn at 5:00 AM

Email ThisBlogThis!Share to TwitterShare to FacebookShare to Pinterest
Labels: Alfred Tennyson, Idylls of the King, One Shot Wednesday, One Stop Poetry, Poetry

"A small jarring; the boat
shudders in slight movement,
a barely felt motion of death
as a soul wings free."
Wow...I felt that. Amazing Glynn.

I wish I had more time to soak in the classics. Thanks for translating this image so wonderfully.

As I mentioned on FB, wonderful post. That image is riveting.

The first four lines of your second stanza comprise a poem itself and speak so well to all that the image conveys.

This is simply stunning, Glynn. I always enjoy your poems, but sometimes your words transport me. This is one of those times. Bravo.

I would have been standing in line to view this picture, too! Awesome trio - your rendering, Tennyson, and this artist!
You proved why it is an enduring classic. You made it speak again. (Like Anne of Green Gables in previous generations and The Band Perry for our kids. http://www.youtube.com/watch?v=7NJqUN9TClM)

Such a great combination of word, imagery, and music.

ah, it is such
that we live
oblivious

The fun thing about it is how it demonstrates that inspiration begets more inspiration ... it moves from poetry to painting, and back to poetry. Maybe your poem will inspire someone to put paint to canvas! :-)

Oh my. I am speechless.

And I am so grateful you included McDowell's symphonic poem! I'm listening to it while I type and read.

wow glynn this is tremendous...the small barely felt releasing of the soul was my fav part...

Solid use of details to form a moving tale. Good stuff.

Excellent Glenn..in all respects. You have given us the complete art. Thank you. Gay

A fitting symphonic background to a sombre and yet somehow resolved piece. Beautiful lines of grief and relinquishment. And a wonderful painting as well.I don't miss much about Chicago, but the Art Institute, haunt of my youth's idle hours, will never be forgotten for the riches beyond price it gave a poor slum child in exchange for just the empty bottle deposit money she collected to ride the el to get there.

Just excellent I love what you did with this piece, the words the painting ....truly a mystical trip into Avalon and through the veil of Arthur....very nice indeed...bkm

Glynn, this was a beautiful poem. As a stand alone, it is a masterfully weaved tale. How sad that true love is her undoing. All the while the rower is oblivious. Thank you for the history behind the painting as well. It adds a nice touch. Thank you for sharing!

not just beautiful...but arthurian...so full marks from me...and for the Idylls....mine is sitting within a hands reach from where i sit right now...cheers pete

This was a lovely interpretation of the legend. Thank you for the background. It's interesting how the painting and legend struck some kind of chord. Clubs, a waltz and a symphonic poem are understandable. But a cigar? Wow.

Its beautiful Glynn.. I liked is so much. With the start of the image to the verse and to the Jarring ... and in the end 'oblivious' so perfectly placed words to give you the feel of the verse... I liked it ... thanks for sharing...