The Art of Brother Mel 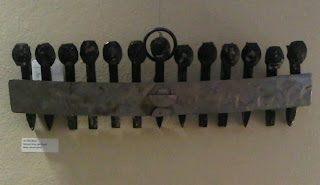 In November, our church had its annual art fair. It’s actually a fairly prestigious event – your work had to be submitted and accepted, and a select group of judges evaluates each work and awards ribbons in various categories. About 100 works adorned the walls of Sunday School classes and hallways, or rested on tables and pedestals.
Submissions to the show can come from the community at large, and quite a few people from outside our church participate. The first weekend the show was open, I walked into my Sunday School class and was amazed at the quality (the room for our class ended up with most of the sculpture).

A metal sculpture on one wall caught my eye. It was clearly a representation of the Last Supper, but the individual figures were real spikes, bent to resemble Jesus and the 12 disciples. The sculpture was done in the style of Michelangelo’s Last Supper, with the figures seated and facing in the same direction. The appearance is not polished but rather rough. I was so taken by the sculpture that I took a picture of it with my smart phone (the photo above).

The artist was Brother Mel Meyer, a Marianist who lives and works at St. John Vianney High School in my own St. Louis suburb of Kirkwood. I had seen metal sculptures on the campus some years ago, when my oldest played sports for a rival high school, but I had no idea that the artist lived and worked there.

The price was reasonable; I told my wife I knew what I wanted for a Christmas present. And then I called the number listed for the gallery at the school. They held the sculpture for me until we could come pick it up. 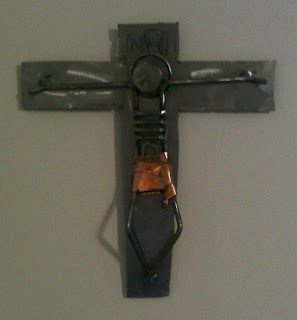 When we arrived at the gallery one cold Saturday earlier this month, we discovered the world of Brother Mel Meyer. And what a world it is.

We wandered around the gallery (several rooms and on two levels), examining the pieces while under the half-dozing eye of an elderly man helping customers.

The elderly man turned out to be Brother Mel.

A native of the St. Louis area, he has been a resident artist for more than 35 years. He studied in Switzerland and Paris, and earned a Master of Arts degree at the University of Notre Dame. There’s even a wonderful coffee table book about his life and work, entitled Brother Mel: A Lifetime of Making Art by Anne Brown.

It was a wonderful time. He fetched the Last Supper from the back; it's – not surprisingly – heavy, heavier than it looks, and we have to get someone in to anchor it on my office wall. We also bought the book and a crucifix (pictured).

I could have spent a lot of money in that gallery.

Perhaps that best place in the building is a small room that seems a kind of chapel. There are no seats, but simply to stand in that quiet place furnished with religious art was a moving experience.

St. Louis has many wonderful attractions – the Arch, the world-class zoo (still free), the Botanical Garden and many others – but the gallery of Brother Mel Meyer is worth repeated visits.

I love those quiet, sacred spaces where the silence and beauty fill me with peace.

Oh, this is one to put on my list if I ever make it back to St. Louis for a visit. Wonderful work! Such depth of feeling evident in just the two images you show here.

How beautiful and so original.....

A place I would very much enjoy visiting ...