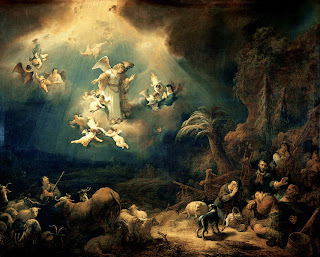 The summons was wordless.

I journeyed to complete, with the others, what we had been commanded to do.

I was not to be sent to kings or nobles, nor to merchants or the wealthy or even shopkeepers and innkeepers.

I was sent to the true descendants of David, those who knew and hoped, those who held steadfast like David had. It was no coincidence that those with hearts after God’s own would be found in the hills around the City of David.

As David had been found.

I startled those shepherds and told them not to fear. They sensed, correctly, the one who had sent me.

I spoke but few words, stark in the plainness and simplicity. Not because I spoke to plain and simple men, but because the moment spoke for itself; it needed no elaborate explanation.

I spoke the message of God in the language of men.

Yet even as I spoke, I knew to speak the words is not to live the words, is not be the words.

The others arose behind me, and the worship of God filled their voices, spilling over into the shepherds’ ears and hearts. We sang to those who knew.

Then we were gone, stunning the shepherds with the suddenness of the leaving, as if we had overcome the night and then vanished within it.

It was by divine design that he used his warriors to speak and sing. I am a warrior in the service of my commander.

I and the others surrounded that family, that night and many to follow. No human saw me at the stable, but I, too, fell to my knees and wept in worship.

A little later, I whispered into the ear of the man to flee to Egypt. He recognized my voice from before.

Much later, as measured in shepherd’s time, we were recalled, and legion was set loose, for three days.

I was then sent back.

To roll away the stone.


Painting: Angels announcing Christ's birth to the shepherds by Govert Flinck (1639); Louvre, Paris (public domain).
Posted by Glynn at 5:00 AM

That line is striking to me. bn

To speak the words is not to live the words.

And what Michael said.

This is a keeper.

I have never heard the angel's perspective before. Quite unique.

These have all been awesome.

Oh my. I don't know how you do this -- but it is inspiring and touching and humbling all in one!

"I spoke the message of God in the language of men." as only the angels know how.

Glynn, that is so cool. That's the first time I've read the Christmas story from an angel's perspective. Awesome. And I loved this part:

"I spoke the message of God in the language of men...I knew to speak the words is not to live the words, is not be the words."

I love this series of fresh perspectives. You are breathing such life into the Christmas Story for me, Glynn!

Blessings and joy to you and yours this Christmas...
Michelle

This stopped my heart with its truths.

to imagine these
different perspectives
in my mind
makes many pictures

I am just now catching these - amazing. I love them, the perspective you offer!

Glynn. This is so powerful. Just imagine. You've helped me do so. Quite well.

Yes Glynn, thanks for stretching my imagination yet again...love this series.