John Herrick's "From the Dead" 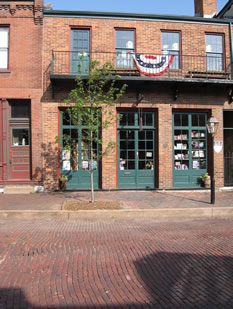 My wife and I were wandering around the shops of Main Street in Old Town St. Charles. It’s part of the metro St. Louis area and on the Missouri River; it was Missouri’s first state capital way back in 1820. Today, the buildings along Main Street have been preserved and turned into shops and restaurants.

And Main Street Books (photo at left). How we always end up at a bookstore is beyond me.

We know the owner; she and her husband live in our suburb of Kirkwood and he and I once took a class together at Washington University. (He’s a lawyer but he’s still a nice guy.) We had a good visit and then I wandered around the book store, one of those bookshops that have almost disappeared off the face of the planet. It’s a general bookshop with a large children’s section (the owner is a published children’s author).

Yes, I found a few things. And I found what looked and didn’t look like Christian fiction. Intrigued, I bought it.

From the Dead by John Herrick is the story of Jesse Barlow, a 29-year-old would-be actor who left his hometown in northern Ohio to seek fame as an actor in Hollywood. In 11 years, he’s managed a few bit parts, but his job at a photography shop tells you he has yet to meet the success he craves. He lives with his girlfriend, Jada Ferrari (one cool character name), and they maintain a lifestyle of alcohol, pot and chasing after fame. Jada has become the more successful of the pair, and she pays most of the bills. Jesse is increasingly doubting what he’s doing and himself, and is caught in a downward spiral as his desperation grows. One night, he attempts suicide, and almost succeeds. 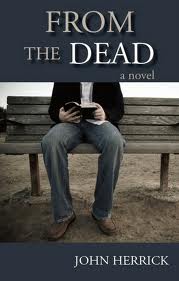 He returns home to Ohio, to his pastor father, his younger sister and Caitlyn, the girl he left behind. And he discovers Drew, the son he didn’t know he had. And Jesse’s story begins to change, and change dramatically, becoming a journey to discover fatherhood and rediscover faith. Then physical illness changes the journey yet again.
From the Dead is a well written and engaging story. It moves, and moves quickly. I could tell I was caught when I'd be forced to put it down to do something like eat dinner.

But to return to the question I had when I first picked it up, is it or isn’t it Christian fiction, the answer would have to be both no and yes.

First the no: As good as this story is, it would not – could not – be published by a Christian book house. It has strong language, including four-letter words, especially in the first, Hollywood part of the novel. And there are some suggestive if not graphic sexual scenes.

Then the yes: I don’t think I’ve read anything in popular novel form as good as this in describing a journey of faith. Jesse is the prodigal son; this novel is a kind of retelling of the parable of Jesus. This is a story mostly about what happens when the prodigal son returns, and it is not all easy sailing.

I finally decided to stop worrying about whether it was “Christian” fiction or not and accept that From the Dead is simply a good story. Its greatest appeal may be to prodigal sons (and daughters) like Jesse, and we have all been there at one time or another, in one way or another. And the simple message of this simply good story is this: there’s always hope.

Glynn: thanks for this review. I have never heard of this book but will now try to find it at my library or on Amazon. I am always in the market for good books, especially those with human interest stories. This one sounds like a keeper. As for Christian/non I would say what is so wrong with reading something that is not but has a good story behind it with a message?

I understand why you gave the disclaimer, but (within reason) I would agree that a good story is a good story and valuable on those merits. I would actually be very interested to read this. Sounds great. Thanks Glynn.

Great review Glynn -- and I love that you've come to the decision -- to quit worrying about whether or not it's Christian fiction -- it's a good story.

Happy New Year dear Glynn. You are such a gift in my world.

what a cool bookstore!
to have a neighborly connection with the owners is a special treat.

i enjoyed the whole post/story.

I enjoyed the review and feel your trepidation of calling it Christian fiction. I think a niche of formulaic Christian books has grown so huge in the last 15 years that if a work of fiction "breaks the rules" it becomes tricky to recommend. I understand there are things people don't want to dwell on, but it seems the theme of a book is too often overshadowed by a reviewers' fixation on a scene. Thanks for a sensitive and thorough look at a new book.