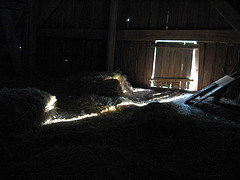 The young couple had moved from Texas to the Midwest for his new job with a new company. They knew no one in their city. No friends. No family.

There were problems, as there always are problems.

The mortgage market was frozen in Texas, and would stay frozen until the legislature met to lift limits on mortgage rates. Months and months away.

They were in an apartment, and finances were worse than tight.

It was cold, bitterly cold. Snow seemed non-stop. The newspapers and magazines were filled with stories of global cooling, inflation, unrest in Iran, rising energy prices. Not a propitious time to bring a child into the world.

For she was pregnant. Unhireable.

They had even talked about not being able to afford a baby.

He finally stopped the conversation with a definite “it’s not a question.” She was silently glad.

There was no money for Christmas. They asked family not to send gifts, but family send they would anyway. They scraped enough money together to make homemade peanut brittle, a favorite on both sides of the family, to mail to relatives back home.

For each other, they gave promissory notes, slips of paper with silly things for the present and hopes for the future.

They clung to each other, and they clung to their faith. He stayed angry with God, for leading them into what seemed an abyss, or at least pointless.

It was a dark Christmas.

Two months later, the baby was born. Four months after that, after the legislature acted, the house in Texas sold. He got a promotion and a raise.

They would always look back on that Christmas as the dark time. They wouldn’t talk about all the meaningful and real things they learned, or how they came to understand the true spirit of the season, or how they understood that love is all-important. There were no sweet lessons to write about later.

What they did learn, and what they did understand, was that faith is easy when times are good and wallets are filled.

Faith is not easy when wallets are empty, or someone you love is seriously ill, or a layoff is coming, or people are suffering.

But those are the times when faith matters more, when it’s only a little light in the darkness.

This post is also being submitted to Bonnie Gray’s blog carnival on faith at Faith Barista. To see other posts, please visit her site.

Photograph: Hayloft by Nancy Rosback. Used with permission.
Posted by Glynn at 5:00 AM

Email ThisBlogThis!Share to TwitterShare to FacebookShare to Pinterest
Labels: Christmas

another unexpected turn in the series. nice.

Oh wow. The hair on my neck is standing up.

this is beautiful Glynn. Really beautiful and meaningful.

Merry Christmas my friend. You are a blessing in my life.A petal in my gratitude bouquet every morning.

Yes, those are "the times when faith matters more."

You always have a word, my friend, you always do.

"Only a little light in the darkness..."

Yes. These last months have taught us good.

Me, too. Writer, that is. Accidented on yours out of a Tweet. I think I'll stick around, maybe visit your friends. You can know a writer by the company he keeps.(www.Gendads.com)

Oh, the "not talking about the meaningful" has made me sad for them. It's quite a loss to forget our humble beginnings...in more ways than one.

Your words glow bright and you inspire me. Thank you.

Glynn--I don't know how I had missed the earlier posts in this amazing series, but I just caught up. Wow!! Each one is such a gem! I think this needs to be a book. I want to hold it in my hands and read it by firelight and remember . . . remember . . . all of them and their eye-witness views of His coming.

Parts of your story are all too familiar, as I'm sure they are to most readers. We learn so much when we have tough times. But sometimes it takes me a LONG time to admit it.

Hmmm...you are so right, Glynn. Hanging on to even a glimmer of faith when it seems so dark is vitally important. Thanks for sharing this story. Have a blessed Christmas!

this reminds me of the song, "the twelve days of Christ mass". but...

your story gifts, that you share with us, are much better than calling birds or golden rings.

This series needs a broader audience ... thank you.

I love this, Glynn. Faith is hard in the tough times. But faith means more in the hard times than in the easy ones. When things are going my way, sometimes it easy to forget why I need faith anyway.

This is a great series.

I'm telling you, Glynn. If God prompts, write that book.

In just a brief post, you made me cry. I'm not saying it was sentimental. I'm saying you moved something in me -- and I figure writing this did the same for you.

Thank you, thank you for pouring such extravagant beauty this month to unwrap Jesus together. You've made this month that much more memorable, pointing us to Him through your stories.

I think this one is my favorite of them. Perhaps because I'm discovering just how much more valuable the difficult is than the easy ... right now. Thank you for sharing.

And thanks for stopping by, too. I'm glad. May your time with friends and family be full of generous joy and simple peace, in Christ.

One of my friends is in the darkest Christmas of her life today. Her husband died this morning from Influenza A. He was barely over 30. I know these words won't be heard right now, but I want to remember them to share with her in a while when her heart can hear again.

Wow, Glynn, that sounds a little too close to familiar...moved our family to a new place, freeze on raises for over 3 years (that we were desperately counting on), living paycheck to paycheck...except our kids are no longer babies. I know a lot of people floating the same boat right now. Fortunately we always have hope and the real treasure of the season.