Looking Back at Blessings 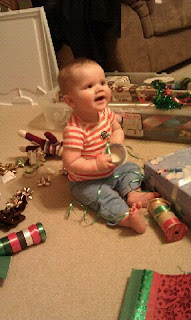 I’m not big on New Year’s resolutions, most likely because I have too much experience in not keeping them. I like Bradley Moore’s approach over at Shrinking the Camel: focus on growth areas and take some risks.


Instead of resolutions and looking forward, I thought I’d look back and see the blessings I and my family experienced in 2010. There are far too many to include in a blog post, so I will only cite the highlights.

One of the biggest blessings – top of the list – has to be Cameron Andrew Young, born March 11. If there is any benefit to aging, it’s becoming a grandparent. And for me, it was love at first sight, after one wild 24 hours.

My wife and I celebrated 37 years of marriage.

My youngest graduated from college, is gainfully employed, and doesn’t live too far away.

We were able to visit my mother and family in New Orleans, and see friends we hadn’t seen in a while.

I work with good people. I have great people on my team at work.

I became a contributing editor for The High Calling, and I was able to meet the editorial team during a four-day writer’s retreat at Laity Lodge in Texas. People I had previously known only online (or a phone call or two) now had faces and voices. And there were no surprises – their online presence was a direct reflection of the real people.

At that same workshop, I was able to sit for two days with a group of poets, all of us being mentored and encouraged by Scott Cairns.

Online relationships grew, strengthened and sprouted. I happened upon the good people at One Stop Poetry and what they’re doing to promote poetry and poets. I wrote a bunch of poems. I became a blogger on culture for The Christian Manifesto. I guest blogged at Michael Perkins’ Untitled, Ryan Tate’s Door Frames of Taterhouse and Russell Holloway’s Bullets and Butterflies. I did an online book discussion with several friends on Michael Spencer’s Mere Churchianity – and over more than three months we covered every chapter. I did three book discussions at The High Calling with Laura Boggess and a bunch of others.I joined Bonnie Gray’s blogging carnival on faith at Faith Barista, and continued with the One Word blog carnival hosted by Bridget Chumbley and now Peter Pollock.

Yes, it’s a lot of stuff. And I’ve hit only the highlights. But I’ve loved every minute of it. And I’ve been blessed by all of it.

Photograph: Cameron Young helping wrap Christmas presents, Dec. 18, 2010, by Stephanie Young. Used with permission because Cameron said it was OK.
Posted by Glynn at 5:00 AM

Email ThisBlogThis!Share to TwitterShare to FacebookShare to Pinterest
Labels: 2010

And you have been a wonderful blessing to so many of us.

It has been a busy year, hasn't it? Thank you so much for your constant encouragement for so many of us. Like Karin said, you have been a huge blessing and I am so grateful for you.

Not only are these blessings, they are wonderful accomplishments and signifiers of a full and rich life.

Happy New Year. I'm honored to call you my friend.

Happy New Year Glynn -- my year has been filled with blessings too -- and I count you as one of them!

What an awesome photo.

It's good to reflect on the blessings. You made me smile with your genuine appreciation for all these things. Happy new year, Glynn!

these area all really good blessings!

wow, that little Cameron is really getting in on the action now!

It was a real good year. One of my highlights was getting to know you.