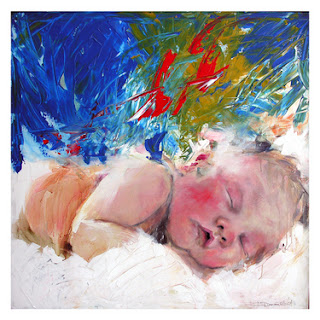 The season of darkness and warmth is ending, the darkness wet; the warmth moist. It has been an odd sensation to be swimming while connected to a throbbing, elongated life preserver.

But it has not been a season of silence. I am keen aware of the liquidity, the protective squishiness of living inside my mother. Like the continuous splashing of diving into a deep pool.

I hear my mother’s heartbeat.

It is strong, not only because of her youth. It beats with purpose, with mission, with knowing what it is, and what it can cost, to accept the commands of the Lord.

And it comforting, perhaps I can clearly hear the sounds outside – animals, voices, the hooves of galloping horses, soldiers rudely shouting.

When we rode into Jerusalem, my mother seated on a donkey (they bray a lot), the noise was chaotic and enormous, a symphony of cacophony, the bustle and excitement of a city expecting a king. It is a city that will be disappointed, murderously disappointed, a city that betrays both itself and its destiny.

The walls that have protected this human body I have are now pulsating in imminent collapse. The time is now, an abbreviated, parsed second of heavenly time.

My parents will always be mystified and a little frightened of me. I will have to tell my earthly father to teach me his trade in wood, and he will do that, and do it well. He has already accepted me as a gift, but he will learn than he, too, has much to teach and give to this gift.

And my young mother. Even when she doubts, and she will have doubts, something would be wrong if she did not, even in her doubts she will love me. For three years of my ministry she will watch me with growing alarm because she loves me.

She does not yet know that I am born to die to rise.

And her heart will break, for a time.

Now it begins, with the cry of an infant held by his earthly father as he cuts the cord connecting me to my mother. He has cleansed with knife in the fire.

Even through the mists of infant eyes, I see the joy on their faces.


Illustration: Baby Jesus by Deborah Woodall via Mark Mallett.
Posted by Glynn at 5:00 AM

A possible typo: three instead of thirty?
Thank you for this series, Glynn.

Thank you for reading it, J. And actually I meant three - I added "of ministry" to clarify that.

Glynn I have loved reading this series. All the posts have been beautiful

He really came as a baby didn't he?
Thanks for reminding me....

Lovely culmination of your series.

Merry Christmas, Glynn. May the day's blessings be yours.

into flesh, His own creation.

I love this perspective from the womb. I, too, have enjoyed these character studies, Glynn. Pray your Christmas has been beautiful. There's still a few hours left :).Enjoying the calm that comes after the noise of love quiets here. Blessings!

I'm hoping this isn't the 'end' of the series but rather, the beginning of wonder and light. This has truly been remarkable Glynn.

PS -- I confess, I read the 'three' and wondered for a moment, what does he mean?

This is the sweetest one yet Glynn. Such a poignant glimpse from the Babe's point of view.
I have the same thoughts about His mother. I cannot imagine what those three years were like for her.
Your writing blesses Glynn. I am so delighted to have met you.

we were just talking about this this morning - well written perspective

...and it came to pass..shepherds, singing angels, a star, a barn.

Glynn, you are a MASTER! You bless us with your Christmas consecution!