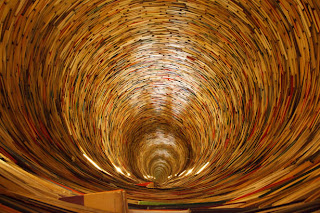 Books have been an important part of my life as long as I can remember. I can recall my mother reading Grimm's Fairy Tales to me from a large, green-cover edition (I still have it). I can remember the very first book I bought on my own -- Trixie Belden and the Secret of the Mansion. It was a Whitman Books edition that cost all of 59 cents at the local dime store.

I loved the monthly flyers sent home from school for the Scholastic Book Club. My parents kept me to a set budget, so I worked hard at maximizing how many books I could get. My parents indulged me, I think, because I was the family reader. My love of books has never waned (ask my wife, who has a rule of "you buy one, you give one away" or the builder of our house who reinforced the floor of one of the bedrooms to accommodate the bookshelves).

I read a lot of good books this year, and I'm challenged to come up with the list of the best I've read. One thing I can tell is that I'm reading more contemporary poetry than I used to read. The number of mysteries and non-fiction is down a bit, and fiction has a slight increase.

Refractions by Makoto Fujimara. This is a wonderful groups of essays on art and culture, framed partially by the first-hand experience of 9-11.

A Short Trip to the Edge by Scott Cairns. Cairns takes us on several pilgrimages to Mount Athos in Greece.

Why Translation Matters by Edith Grossman. One of the best books I've read on the importance of translations, by one of the leading translators of Spanish and Latin American fiction.

Parting the Waters by Jeanne Damoff. It's hard to imagine what this family endured with the near-death of a child and its aftermath, but it is an eloquent tribute to faith, love and determination.

Mere Churchianity by Michael Spencer. I've blogged about this book for almost five months. It's an important book about the state of the church in North America.

Simon Called Peter by Dom Mauro Guiseppe Lepori. A meditation on the person who was (and is) St. Peter.


God in the Yard by L.L. Barkat. I didn't spend a year in the back yard, but I did learn many things from following the exercises in this book.
Poetry

Barbies at Communion by Marcus Goodyear. These are poems coming from the hand, and the heart, of a poet mastering his art.

The Prison Poems by Dietrich Bonhoeffer. Ten extraordinary poems written by the German pastor in prison prior to his executive by the Nazis at the end of World War II.

Another Hotel Room by Steven Marty Grant. I love the grit and city feels of these poems.

The Written Word by Shaun Masterton. Poetry written from a man's heart.

Lighthead by Terrance Hayes. This one happened to win this year's Pulizer Prize for poetry. But I liked it (and reviewed it) before that happened.

Ballistics by Billy Collins. Yes, there's a poem or two about ballistics included.

Silence by Shusaku Endo. A story of Jesuit missionaries in 17th century Japan; a story about apostasy and faith.

River Rising by Athol Dickson. It was published several years ago, and it is still a remarkable novel.

Snow Day by Billy Coffey. A novel by a writer who breathes storytelling.

Gilead by Marilynne Robinson. A lot of people find this novel difficult, especially with the one-person narrator. It is a wonderful book about a pastor looking backward to his father and grandfather.

City of Tranquil Light by Bo Caldwell. A quietly moving story about missions in China from 1906 to 1932.

Every Breath You Take by Travis Thrasher. A novel that is a kind of love song from a dead father to his daughter.

Someone to Blame by C.S. Lakin. A novel about appearances and prejudices and anger and how they turn on innocent people.

Almost Home by Chris Fabry. I think I could read anything this author writes. The third of the three "Dogwood" novels (connected only by setting), it is captivating.

Darlington Woods by Mike Dellosso. Dellosso artfully blends past and present into a first-class suspense and horror story.

Solitary by Travis Thrasher. The first in a Young Adult series, Solitary makes great reading for adults, too.

The Unseen by T.L. Hines. The official category for this book would be "speculative," but the story of a young man who lives around people but where no one can see him is a riveting read.

Tomorrow We Die by Shawn Grady. A paramedic himself, Grady writes what he knows, and he keeps the suspense going non-stop.


Photograph: Book Tunnel by Petr Kratochvil via Public Domain Pictures. Used with permission.
Posted by Glynn at 5:00 AM

Well, you have plowed through quite a few books this year, haven't you? I admire you for all that reading! I share some of the books on your list here, but the one author that I haven't yet read (and am now compelled to read) is Wendell Berry. It seems everyone but me has read and been highly influenced by his work. I better get on the stick.

Thanks Glynn...I would only hope to read half as many books. I Really like the "enough said" guy.

I want to take the speed reading course you took!

That's a very select group you've put me in, Glynn. Thanks so much! And for all of these recommendations, too.

How you managed to narrow down your list is your secret. You have some wonderful titles here. I like how far you range and how varied are your writers. Thank you for all the great reviews this year. You definitely keep us ringing up the cash register at Amazon.

And Brad, yes! Get Berry and read all you can of him. He's quite a character, too.

Did you know Scott Cairns has a Greece workshop/retreat - registration now open? :)

Love the picture - the Rabbit Hole of books. Nice variety. Was it personal to share your list? I was thinking it would be for me. A bit vulnerable.

Just want to second your Wendell Berry recs, as I'm on a total Berry reading binge. I started with "That Distant Land," and now I can't stop. Please, nobody stop me!

Thanks, Glynn, for including me on your list. I feel loved.

both my daughters are readers. the eldest still likes to read paper with covers.
i am getting the younger a kindle for her present this year. i am still going to have to encourage her to check out at the library, and take her to book stores...just because. i am wondering if peter will break down and borrow the thing for one of his biz trips.

great for all the waiting that we do with flying these days.

i spent a bit of time in powell's yesterday, as i was doing some other shopping near by. i was scanning the art section, and came home with a used book from 1976 on prints of the 20th century. just a little something to keep me from buying all the other ones that i would have liked to buy. one can never walk out of a book store empty handed.

i also got the younger magnetic poetry, as she is not getting the fun of it at school. the teacher is turning the students off instead of on. so i want to come up with some things for her that will make words more fun. she has a better mind than i for retaining information.

Glynn, you've been such an encourager in my life this year. I'm delighted to know you and honored by your generous support for me and our story. Thanks for the beautiful review you posted earlier and for including it in this list.

Wishing you and yours a beautiful Christmas.

Thanks for this unbelievable list! I'll have to start at the top and make it my 2011 list :) One book that's on my 2010 top list is Carnal Weapon by Peter Hoffmann. It involves spies from the Eisenhower-era, love affairs, and a bit of mystery encapsulated in one very fun to read book.