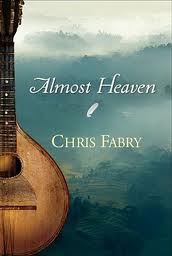 If I had known that I was about to read a book about a mandolin, an angel, a radio station and a lovelorn mail man, I don’t know if I would opened the cover (an angel?). But then, Almost Heaven is a novel by Chris Fabry, who is such a good storyteller (Dogwood, June Bug) that I would have read it even if there had been a picture of Barney the dinosaur on the cover.

And I wasn’t disappointed. Not one bit.

Almost Heaven is the third of Fabry’s “Dogwood” novels. The basic story lines are unrelated; what they have in common is the setting – a small town in the author’s home state of West Virginia. Dogwood is a love story about a young man who goes to prison for an automobile accident that killed three children and then tries to rekindle a romance with his girlfriend, who is now married (yes, this is Christian fiction; trust me). June Bug is a retelling of Victor Hugo’s Les Miserables, but it is also a story that stands on its own.

Almost Heaven is about a man whose life seems broken in so many ways but who still manages to do what he knows he’s been called to do, even if he doesn’t understand why. His name is Billy Allman. His life seems like a steady stream of tragedies and disappointments – the deaths of his father and then his mother; rejection by the girl he loves; his innocence taken from him; and living from hand to mouth while he tries to keep his dream – a small radio station – alive. What he doesn’t know is that he’s being watched over by a guardian angel named Malachi, even if the angel isn’t quite sure what the point of Billy’s life is supposed to be.
It would have been easy for this story to slip into melancholy or sentimentalism, but Fabry blends it with a strong undercurrent of optimism and faith. What results is a story of how God uses “the least of these” – people who are broken, often in multiple ways – to accomplish remarkable things.

Fabry, the author of children’s books with Jerry Jenkins (he of the "Left Behind" series fame) and co-author of Coming Back Stronger with New Orleans Saints quarterback Drew Brees, has written a remarkable series with these three “Dogwood” novels. They each contain enough interesting twists and turns to keep the reader fully engaged (and sometimes tense).

But most of all there is a tenderness that suffuses these stories, a tenderness for family, people and place.
Posted by Glynn at 5:00 AM

This sounds like a great book, Glynn. I'll have to treat myself to a copy.

You paint a beautiful picture of this book and it really makes me want to get a copy! Thanks!!