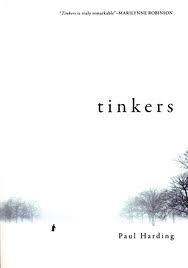 As I was reading Tinkers by Paul Harding, I was initially reminded of Marilynne Robinson’s Gilead – a similar sense of old age and dying hovers over both. As I read on, “The Bear,” the short novel (or long short story) by William Faulkner came to mind – particularly in the descriptions of the woods, with Harding’s woods of Maine not unlike the forests of Faulkner’s Mississippi. And then it emerged into something all its own, a remarkably well written novel in Harding’s own voice.

Tinkers is a story about fathers and sons. George Washington Crosby lies in a bed in his living room, attended by family, and he is dying. As he dies, his mind and memory, and so his own life, begin to merge with that of his father, Howard. Howard had been a tinker in rural Maine in the 1920s, traveling by horse-drawn wagon to isolated farms and homesteads to sell everything from hairbrushes and pots to soap and any other tool or product his customers might need.

Howard is also an epileptic, prone to grand mal seizures. One day, he does not return home, and George’s mother assumes he’s died somewhere in the forest he travels through, the natural space of trees, animals and geography that come to seem part of his very soul. Somehow it is fitting that he disappears into what he loves.

George has devoted his life to clocks, fixing them, maintaining them, collecting them. Like his father’s life was surrounded by nature, George’s life is surrounded by time. Eventually, time and nature are going to meet and merge, in death.

Harding explores the relationships between fathers and sons. Robinson did the same in Gilead, but she did so through a lens of faith. Faith is overtly absent in the world of Tinkers, and yet it’s there, ever so faint but important an echo, in the descriptions of the ponds, trees, fields woods and flowers observed and almost spiritually consumed by Howard, just as George almost spiritually consumed by the ticking of his clocks. The master creator and the master timekeeper is there, if invisible, and Harding acknowledges that presence in how he structures the novel, like a countdown toward George’s death.

Tinkers received the Pulitzer Prize for fiction in 2010, and it was Harding’s first published novel. And it is a fine novel, fully deserving of that recognition. It’s also one of the best serious, literary novels I’ve read. Harding transcends the story of a dying man remembering and hallucinating about his long-gone father, speaking to a yearning we all have for understanding our own fathers, and our sons.
Posted by Glynn at 5:00 AM

Sounds like you've been tinkering with some reading over the holiday! Glynn, you have such a great way of reviewing this novel. The merging of time and nature... father and son... the echoes of faith... Beautifully reviewed, as well as any New York Times editor!

And the 'must read' pile just got higher!

Great review Glynn -- you definitely instill a sense of 'must read'.

Requesting this one from my local library. Thanks for the recommendation.

The story’s genesis came from Mr. Harding’s own grandfather, who grew up in rural Maine and whose epileptic father abandoned the family when he learned that his wife, Mr. Harding’s great-grandmother, planned to send him to an asylum.
~


your post had be curious about the fellow behind the book.