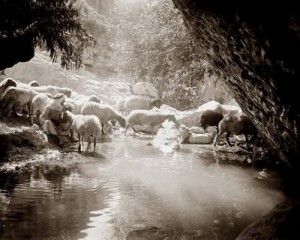 I am half-asleep. The night is cold. I’ve pulled my cloak closely, moth-eaten thing that it is, and sit as close of the fire as I can without becoming a piece of kindling. The sheep are mostly quiet, perhaps dreaming of their wool becoming tunics or what it’s like to become dinner or, for the best of the best, what it is for the priests in Jerusalem to slit your throat and let the blood run into the stones of the temple court.

I don’t recall how it started, but I looked up, toward the top of the hill we were camped upon. I thought I was one of the sheep, dreaming, for there was the figure of what seemed a man. But when I think back now, I wonder, how could I see the figure in the dark? For the figure came before the light. It still doesn’t make sense.

And then that light, that glorious light, a radiance that was more than a thousand suns. It was golden light, and it was both protecting and terrifying. From within the light, the figure spoke. You know the words as well as any; the story’s been told more than any I’ve ever heard, and I know because I have told it, too.

Then the voices. I had never heard such voices, neither man nor woman nor child. Voices with the purity of clear water in the stream, washed by the rocks.

Suddenly, darkness again. We shepherds gathered around, and looked at each other, each afraid to say what had been seen.

“The angels of heaven,” one said.

We did something no shepherd in his right mind would do. My father would have beaten me if he had not been home, asleep in his warm bed.

We left our flocks, still dreaming, and we followed the light of the star.

The City of David was no Jerusalem, nor was it a collection of hovels that people call a village. We walked through the streets, not thinking the flocks behind us but only the light before us.

They were in a stable, a place for the animals. It was a shelter, yes, but only once removed from the open fields. We stopped, and stared. I thought I could come no closer to this child.

The woman looked at me and smiled, motioning me forward. I leaned down. I touched the baby’s little cheek.

I touched the cheek of Messiah.

I fell to my knees. The tears streamed but I had no shame. I can’t tell you if they were tears of joy or relief or awe or fear. Perhaps all of these.

We knelt for what must have been hours. Others came, but we took little notice. Even the three in dusty finery and bearing gifts could not distract our attention.

I don’t recall how we left, only that we did when it was time. Returning to the fields, the night becoming lighter, we found the fires burned down and the sheep still resting. As we knew we would.

I have touched his face.

Wonderful Glynn...the essence in so many what of what it may have been like so long ago. I pray that each of us this season will shed tears of "joy, relief, and fear" and "touch the cheek of the Messiah". What a great way to start the week!

I have touched his face...

Greetings!
Here is the end of the year awards 4 you, enjoy!

At this time of the year, We wish you all the best !

Link up a poem to our potluck today, We send blessings all the way to brighten your day!

I am so enjoying your retellings of the story from the perspectives of those not heard before. Thank you for giving them voice.

So absolutely awesome...man, that was good! Thanks Bro'

These are so well done, Glynn.

Glynn this is so magnificent! You took me right there. The true meaning of Christmas.

Fabulous ... this shepherd becoming a sheep after touching Messiah.

Thank you for sharing this. I'm linking today.

I love this. One of your best, Glynn.

i like how it seems he is overwhelmed with many feelings and thoughts, yet, all is well.

also, how i am taken along on the journey, i a kind of daze of new awareness.

Awesome, Glynn. I'd say more but that sort of sums it up. :)

Stunningly beautiful--the photo and your words! The wonder and awe of it all--I don't want to stop reading. More, please. Blessings.

What a gift you have given us.