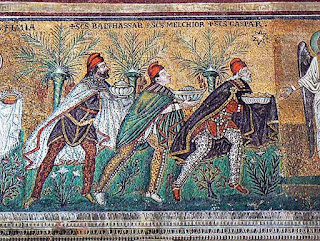 They call me many things.

King, but I rule over nothing, not even my wife.

Magician, but I make no magic.

Wise man, but the more I learn, the less I know.

Astrologer, but the stars know me more than I them.

Prophet, but I only study what the prophets have written; I make no prophecies of my own.

Still, they listen, and they ask. Some fear my answers.

The prophets agree that this was the time, and not only the old Hebrew scrolls left behind in Babylon.

The time, long foretold, had come.

Even the heavens spoke this truth. And we followed the sign of the heavens.

And so I went, to see the king who would rule over hearts.

The king who would rule forever.

The journey was long. Too long. Many times I thought to turn back. But I, or my camel, kept on.

One, then the other, joined me. They too were on the same mission, the same journey, the same search.

To see this king.

Around our campfires, we would speak in spite of the sand between our teeth. We shared our learning, our knowledge, our understanding. We each had a piece, but even together the pieces did not make a whole.

When we reached Judea, we were perplexed why this king would be born in a land ruled by an iron fist of Rome and the venality of a Hasmonean king. Even the priests in the temple at Jerusalem were uneasy. They, too, knew the signs, but too loud a whisper could lose you your priestly head.

We slipped away, quietly, at night, right before the gates were closed.

We found him in the place the call Bethlehem, the house of bread. An odd name for the City of David. But even in our countries, bread is life.

We find our king, the king to rule our hearts for all time.

We find him in a hovel for animals.

And yet, when we saw him, we knew. You could not help but know.

The prophecies had been fulfilled in a most unexpected way, yes.

But they had been fulfilled.

We joined the others on bended knees. We offered our gifts, which seemed so humble in his presence.

And we worshipped, in the murmur of human prayers and the song of a dove, under the sign of the heavens.

This was spectacular. I think it's harder to tell a story that's already been told in poetry. And you did it beautifully.

I am so enjoying the different perspectives...now I wonder who is next? Thanks for thinking through these....

Showing us the familiar from a new perspective is always refreshing...love this :)

I love the heart behind these stories. It's like reading true fiction.

I mentioned yesterday how much I've been enjoying your "perspectives" pieces. In each one, as here, the voice you've assumed shows your understanding of the speaker's status and the wonder always comes across. Wonderful.

I'm with everyone! Spectacular.

I think you have a book here -- with beautiful stained glass etchings of the scenes you so beautifully depict.

Our family has been thinking on those wise men a lot this year. I am looking forward to reading your other "witness" pieces.

I will echo everyone else in saying this was great. I love the fresh perspective you present as you re-tell these familiar events.

That's a good word. The journey has felt a little harder lately. Maybe I should just accept a ride from a camel on my way to worship God in my daily work.

Metaphors are nice, and now I need to find the 21st century social media version of a camel...

Glynn, reading this was splendid.

I really liked looking at the familiar story through your eyes Glynn. I think we often forget they were people just like us - with all those same emotions.
Thank you for this.
Have a wonderful Christmas. What fun it will be with that precious little one.

I love your witness.

wise man, but the more i learn, i find that i used to have a crown before xix-th century when felice kibel changed it for phrygian cap