C.S. Lakin's "The Map Across Time" 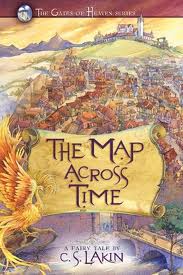 Last week, I talked about C.S. Lakin’s The Wolf of Tebron, the first novel in “The Gates of Heaven” series. The second book in that series is The Map Across Time, to be published March 4 (I read the Advance Reader Copy provided by the publisher).

The two books are independent of one another, sharing only an approximate time and place. Tebron is a small town, where a blacksmith named Joran has to confront an extraordinary quest. In The Map Across Time, the setting is the city of Sherbourne, but a city experienced by the same characters in widely separated periods of time.

Adin and Aletha are the teenaged children of the king of Sherbourne, who’s increasingly in the grip of increasingly evil advisors. Their mother is dead. Adin, the heir to the throne, has a number of physical deformities, and not one whom anyone would expect to undertake a quest. Yet it falls to Adin to save his father and the kingdom, by finding the source of the original curse that lies upon the city and is destroying his father.

And he does that through a map, a special map, a map that takes him across time. Aletha follows, by following Adin's glittering path through the woods. They don’t arrive together; in fact, Adin won’t learn for some time that Aletha is even there.

Lakin tells a wonderful story, full of creativity and imagination and even more unexpected twists and turns than the first novel in the series. And it’s a riveting read, complicated by Aletha falling in love in the wrong period of time; special wizards and seers; evil disguised and exposed; a talking pig who’s absolutely delightful; and nothing being what it appears to be. Lakin controls this story, and does it well; it never flies out of control but keeps to a complete center.

The central figure is Adin, the bearer of infirmities and the bearer of the quest. He’s an unlikely candidate to be chosen to do what must be done, not to mention accomplish it, but he accepts the quest and changes his life and the lives of those he loves, and his kingdom. Lakin draws him well and true, because she draws his heart well and true.

It’s a fine story, an engaging story, one that I had a hard time putting down. It’s suitable for older children, young adults and adults, and even for reading to younger children.

The only drawback is that I have to wait until October to read the next novel in the series.
Posted by Glynn at 5:00 AM